Bertie and the Gardeners or, The Way to be Happy 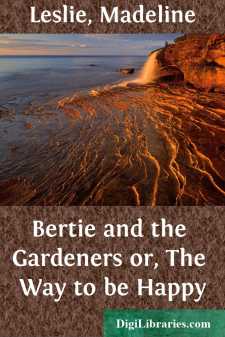 The new house at Woodlawn was nearly completed; and Mr. Curtis now set to work in earnest, clearing the grounds of the rubbish, in order to make the terraces and lay out his avenue in front.

Those who have read the other books about Bertie, will know that two wide avenues, enclosed by handsome iron gates, had been already made; one winding along on the shores of Lake Shawsheen, the other entering from a higher point which led through a grove toward the house where the enchanting view of lawn and water burst at once on the vision.

But in the vicinity of the house, no grading had been done, on account of the vast amount of bricks, lime, mortar-bins, wood and chips lying scattered in every direction.

The house, elegant in proportion and finish, stood about a hundred rods in front of a high, grassy mound, upon the top of which a cluster of chestnut-trees cast a pleasant shade.

The rich, green turf on the lawn which sloped to the lake, was dotted with magnificent old trees undisturbed for a century. Back of the house, or rather beyond the barn, was another swell or mound, which like the first, was so regular in its form as almost to excite the belief that it was artificial. Indeed, from the fact that two tomahawks were found buried in the spot where the barn stood, Mr. Curtis inferred that it might have been used for the grand council of the Indian tribe, and that here they buried all hostilities.

"Certainly," Mrs. Curtis remarked, "this was a pleasant view to take of it," and as there was no one to dispute the fact, the larger mound was called "Peace Mountain."

Mr. Curtis, or the Squire, as the Oxford villagers called him, was now in his element. Every pleasant morning he might be seen, his wife leaning on his arm, walking over the premises, planning the improvements to be made, and often Bertie and Winifred accompanied them.

When the weather was not so clear, the gentleman and his son hurried from one part of the grounds to the other, directing Tom Grant, or measuring with a ten-foot pole.

There was a nice sunny plat containing sixteen acres back of Peace Mountain, which had been ploughed earlier in the season, to be in readiness next year for a garden and orchard. Besides this there were to be heart-shaped and diamond-shaped figures and circlets cut in the lawn, near the house, for flowers of every hue.

It was now October, and the most must be made of the fine weather. Ploughing and preparing the ground for agricultural purposes, was what the farmers in the neighborhood were accustomed to, and therefore help was easily to be obtained.

Through the summer, Mr. Curtis had borne in mind that he should need a skilful farmer to till his land, one who understood the science as well as the art of farming to the best advantage. He greatly approved Thomas Grant's industry, and the zeal he manifested in all that concerned his master's interests; but he feared the man was so attached to the old ways of managing land, that he would be unwilling to avail himself of the improved implements of agriculture, or the new-fangled notions, as he called mowing-machines, horse-rakes, sowing-machines, etc., etc....