Bert Wilson on the Gridiron 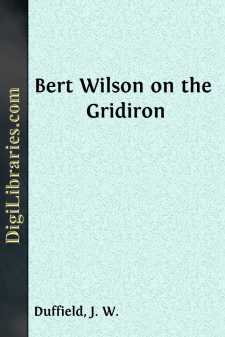 A storm of cheers swept over the field, as it was seen that the scrubs were holding the 'Varsity on their ten-yard line.

Three times in succession the 'Varsity players plunged like enraged bulls against the defenders of the goal, only to be thrown back without a gain. One more fierce attempt, and the ball went to the scrubs on downs.

It was unprecedented. It was revolutionary. It shrieked unto heaven. The poor, despised scrubs were actually holding the haughty 'Varsity men on even terms. More than that; they even threatened to win. They seemed to forget that they were doormats for the "regulars," mere "sparring partners," to be straightened up with one punch and knocked down by the next. The "forlorn hope" had suddenly become a triumphant hope. The worm had turned, and turned with a vengeance. Pale and panting, plastered with mud and drenched with sweat, with "blood in their eyes" and here and there a little on their features, they faced the "big fellows" and gave as good as they took.

Reddy, the college trainer, danced up and down on the side lines and sputtered incoherently. "Bull" Hendricks, the head coach, stamped and stormed and yelled to his charges to "put it over." The things he said may not be set down here, but he gave the recording angel a busy afternoon. His words stung like whips, and under the lash of them the 'Varsity men braced themselves desperately. They burned with shame and rage. Were they to have a defeat "slapped" upon them by the scrubs? The college would ring with it, and it would be the sensation of the season.

But the scrubs were not to be denied. They had caught the 'Varsity "off its stride," and they fought like tigers to clinch their advantage. Every ounce of strength and determination that they possessed was called to the front by the prospect of impending victory. A daring run around the left end netted them twenty yards, and they gained fifteen more on downs. An easy forward pass was fumbled by the regulars, who were becoming so demoralized that the men fell all over themselves. The panic was growing into a rout that promised to end in a Waterloo.

The referee was poising his whistle and looking at his watch, ready to blow the signal that marked the end of play. There was but one chance left—a goal from the field. On the 'Varsity team only two men had seemed to keep their heads. The quarterback and fullback had sought to stem the tide, but in the general melting away of the defence had been able to do but little. The ball was now on the scrubs' forty-yard line. The player who had it fumbled in his eagerness to advance it, and the 'Varsity quarterback pounced on it like a hawk. With almost the same motion he passed it to the fullback. The opposing line bore down upon him frantically, but too late. One mighty kick and the pigskin rose in the air like a bird, soared over the bar between the goal posts, and the 'Varsity was three points to the good....