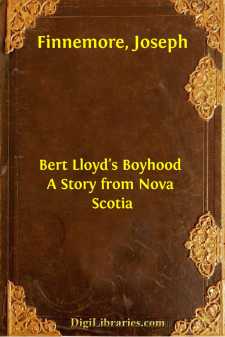 CHAPTER I. BERT IS INTRODUCED.

If Cuthbert Lloyd had been born in the time of our great grandfathers, instead of a little later than the first half of the present century, the gossips would assuredly have declared that the good fairies had had it all their own way at his birth.

To begin with, he was a particularly fine handsome baby; for did not all the friends of the family say so? In the second place, he was an only son, which meant that he had no big brothers to bully him. Next, his birthplace was the stirring seaport of Halifax, where a sturdy, energetic boy, such as Cuthbert certainly gave good promise of being, need never lack for fun or adventure. Finally, he had plenty of relations in the country to whom he might go in the summer time to learn the secrets and delights of country life.

Now, when to all these advantages are added two fond but sensible parents in comfortable circumstances, an elder sister who loved little Cuthbert with the whole strength of her warm unselfish heart, and a pleasant home in the best part of the city, they surely make us as fine a list of blessings as the most benevolent fairy godmother could reasonably have been expected to bestow.

And yet there was nothing about Master Cuthbert's early conduct to indicate that he properly appreciated his good fortune. He was not half as well-behaved a baby, for instance, as red-headed little Patsey Shea, who, a few days after his first appearance, brought another hungry mouth to the already over-populated cottage of the milkwoman down in Hardhand's lane. As he grew older, it needed more whippings than the sum total of his own chubby fingers and toes to instil into him a proper understanding of parental authority. Sometimes his mother, who was a slight small woman, stronger of mind than of body, would feel downright discouraged about her vigorous, wilful boy, and wonder, half-despairingly, if she were really equal to the task of bringing him up in the way he should go.

Cuthbert was in many respects an odd mixture. His mother often said that he seemed more like two boys of opposite natures rolled into one, than just one ordinary boy. When quite a little chap, he would at one time be as full of noise, action, and enterprise as the captain of an ocean steamer in a gale, and at another time be as sedate, thoughtful, and absentminded as the ancient philosopher who made himself famous by walking into a well in broad daylight.

Cuthbert, in fact, at the age of three, attracted attention to himself in a somewhat similar way. His mother had taken him with her in making some calls, and at Mrs. Allen's, in one of his thoughtful moods, with his hands clasped behind him, he went wandering off unobserved. Presently he startled the whole household by tumbling from the top to the bottom of the kitchen stairs, having calmly walked over the edge in an absorbed study of his surroundings.

The other side of his nature was brilliantly illustrated a year later. Being invited to spend the day with a playmate of his own age, he built a big fire with newspapers in the bath room, turned on all the taps, pretending that they were the hydrants, and then ran through the hall, banging a dustpan and shouting "fire" at the top of his voice.

"He is such a perfect 'pickle,' I hardly know what to do with him, Robert," said Mrs. Lloyd to her husband, with a big sigh, one evening at dinner.

"Don't worry, my dear, don't worry. He has more than the usual amount of animal spirits, that is all. Keep a firm hand on him and he'll come out all right," answered Mr. Lloyd, cheeringly.

"It's easy enough to say, 'Keep a firm hand on him,' Robert, but my hand gets pretty tired sometimes, I can assure you. I just wish you'd stay at home for a week and look after Bert, while I go to the office in your place. You'd get a better idea of what your son is like than you can by seeing him for a little while in the morning and evening."

"Thank you, Kate, I've no doubt you might manage to do my work at the office, and that my clients would think your advice very good; but I'm no less sure that I would be a dismal failure in doing your work at home," responded Mr....