Beowulf: An Introduction to the Study of the Poem with a Discussion of the Stories of Offa and Finn 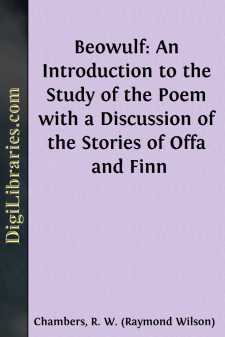 Section I. The Problem.

The unique MS of Beowulf may be, and if possible should be, seen by the student in the British Museum. It is a good specimen of the elegant script of Anglo-Saxon times: "a book got up with some care," as if intended for the library of a nobleman or of a monastery. Yet this MS is removed from the date when the poem was composed and from the events which it narrates (so far as these events are historic at all) by periods of time approximately equal to those which separate us from the time when Shakespeare's Henry V was written, and when the battle of Agincourt was fought.

To try to penetrate the darkness of the five centuries which lie behind the extant MS by fitting together such fragments of illustrative information as can be obtained, and by using the imagination to bridge the gaps, has been the business of three generations of scholars distributed among the ten nations of Germanic speech. A whole library has been written around our poem, and the result is that this book cannot be as simple as either writer or reader might have wished.

The story which the MS tells us may be summarized thus: Beowulf, a prince of the Geatas, voyages to Heorot, the hall of Hrothgar, king of the Danes; there he destroys a monster Grendel, who for twelve years has haunted the hall by night and slain all he found therein. When Grendel's mother in revenge makes an attack on the hall, Beowulf seeks her out and kills her also in her home beneath the waters. He then returns to his land with honour and is rewarded by his king Hygelac. Ultimately he himself becomes king of the Geatas, and fifty years later slays a dragon and is slain by it. The poem closes with an account of the funeral rites.

Fantastic as these stories are, they are depicted against a background of what appears to be fact. Incidentally, and in a number of digressions, we receive much information about the Geatas, Swedes and Danes: all which information has an appearance of historic accuracy, and in some cases can be proved, from external evidence, to be historically accurate.

Section II. The Geatas—their Kings and their Wars.

Beowulf's people have been identified with many tribes: but there is strong evidence that the Geatas are the Götar (O.N. Gautar), the inhabitants of what is now a portion of Southern Sweden, immediately to the south of the great lakes Wener and Wetter. The names Geatas and Gautar correspond exactly, according to the rules of O.E. and O.N. phonetic development, and all we can ascertain of the Geatas and of the Gautar harmonizes well with the identification.

We know of one occasion only when the Geatas came into violent contact with the world outside Scandinavia. Putting together the accounts which we receive from Gregory of Tours and from two other (anonymous) writers, we learn that a piratical raid was made upon the country of the Atuarii (the O.E. Hetware) who dwelt between the lower Rhine and what is now the Zuyder Zee, by a king whose name is spelt in a variety of ways, all of which readily admit of identification with that of the Hygelac of our poem....