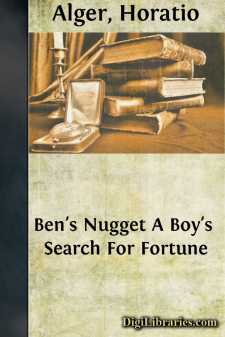 "What's the news, Ben? You didn't happen to bring an evenin' paper, did you?"

The speaker was a tall, loose-jointed man, dressed as a miner in a garb that appeared to have seen considerable service. His beard was long and untrimmed, and on his head he wore a Mexican sombrero.

This was Jake Bradley, a rough but good-hearted miner, who was stretched carelessly upon the ground in front of a rude hut crowning a high eminence in the heart of the Sierra Nevada Mountains.

Ben Stanton, whom he addressed, was a boy of sixteen, with a pleasant face and a manly bearing.

"There ain't many in this neighborhood, I reckon," said Bradley. "I tell you, Ben, I'd give an ounce of dust for a New York or Boston paper. Who knows what may have happened since we've been confined here in this lonely mountain-hut? Uncle Sam may have gone to war, for aught we know. P'r'haps the British may be bombarding New York this moment."

"I don't think it likely myself," said Bradley, filling his pipe. "Still, there may be some astonishin' news if we could only get hold of it."

"I don't think we can complain, Jake," said Ben, turning to a pleasanter subject. "We've made considerable money out of Mr. Dewey's claim."

"That's so. The three weeks we've spent here haven't been thrown away, by a long chalk. We shall be pretty well paid for accommodatin' Dick Dewey by stayin' and takin' care of him."

"How much gold-dust do you think we're got, Mr. Bradley?"

"What!" exclaimed Bradley, taking the pipe from his mouth; "hadn't you better call me the Honorable Mr. Bradley, and done with it? Don't you feel acquainted with me yet, that you put the handle on to my name?"

"Excuse me, Jake," said Ben; "that's what I meant to say, but I was thinking of Mr. Dewey and that's how I happened to call you Mister."

"That's a different matter. Dick's got a kind of dignity, so that it seems natural to call him Mister; but as for me, I'm Jake Bradley, not a bad sort of fellow, but I don't wear store-clo'es, and I'd rather be called Jake by them as know me well."

"All right, Jake; but you haven't answered my question."

"Oh yes. Well, I should say that the dust we've got out must be worth nigh on to five hundred dollars."

"So much as that?" asked Ben, his eyes sparkling.

"Yes, all of that. That claim of Dewey's is a splendid one, and no mistake. I think we ought to pay him a commission for allowing us to work it."

They were sitting outside the rude hut which had been roughly put together on the summit of the mountain. The door was open, and what they said could be heard by the occupant, who was stretched on a hard pallet in one corner of the cabin.

"Sartin, Dick," said Bradley; and he entered the cabin, followed by Ben.

"What was that you were saying just now?" asked Richard Dewey.

"Jake was saying that we ought to pay you a commission on the gold-dust we took from your claim, Mr. Dewey," said our hero, for that is Ben's position in our story.

"Why should you?" asked Dewey.

"Because it's yours. You found it, and you ought to get some good of it."

"So I have, Jake. In the first place, I got a thousand dollars out of it before I fell sick—that is, sprained my ankle."

"But you ain't gettin' anything out of it now."

"I think I am," said Dewey, smiling and looking gratefully at his two friends....