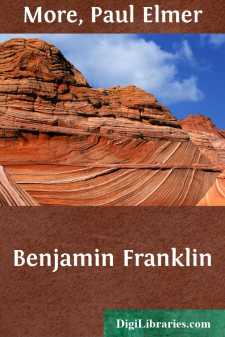 When the report of Franklin's death reached Paris, he received, among other marks of respect, this significant honor by one of the revolutionary clubs: in the café where the members met, his bust was crowned with oak-leaves, and on the pedestal below was engraved the single word vir. This simple encomium, calling to mind Napoleon's This is a man after meeting Goethe, sums up better than a volume of eulogy what Franklin was in his own day and what his life may still signify to us. He acted at one time as a commander of troops, yet cannot be called a soldier; he was a great statesman, yet not among the greatest; he made famous discoveries in science, yet was scarcely a professional scientist; he was lauded as a philosopher, yet barely outstepped the region of common sense; he wrote ever as a moralist, yet in some respects lived a free life; he is one of the few great American authors, yet never published a book; he was a shrewd economist, yet left at his death only a moderate fortune; he accomplished much as a philanthropist, yet never sacrificed his own weal. Above all and in all things he was a man, able to cope with every chance of life and wring profit out of it; he had perhaps the alertest mind of any man of that alert century. In his shrewdness, versatility, self-reliance, wit, as also in his lack of the deeper reverence and imagination, he, I think, more than any other man who has yet lived, represents the full American character. And so in studying his life, though at times we may wish that to his practical intelligence were added the fervid insight of Jonathan Edwards, who was his only intellectual equal in the colonies, or the serene faith of an Emerson, who was born "within a kite string's distance" of his birthplace in Boston, yet in the end we are borne away by the wonderful openness and rectitude of his mind, and are willing to grant him his high representative position.

Franklin's ancestors were of the sturdy sort that have made the strength of the Anglo-Saxon race. For three hundred years at least his family had lived on a freehold of thirty acres in the village of Ecton, Northamptonshire; and for many generations father and son had been smiths. Parton, in his capital Life of Franklin, has observed that Washington's ancestors lived in the same county, although much higher in the social scale; and it may well have been that more than one of Franklin's ancestors "tightened a rivet in the armor or replaced a shoe upon the horse of a Washington, or doffed his cap to a Washington riding past the ancestral forge." During these long years the family seems to have gathered strength from the soil, as families are wont to do. Seeing how the Franklins, when the fit of emigrating seized upon them, blossomed out momentarily, and then dwindled away, we are reminded of Poor Richard's wise observation,—

"I never saw an oft-removëd tree

Nor yet an oft-removëd family

That throve so well as those that settled be."

About the year 1685, Josiah Franklin, the youngest of four sons, came with his wife and three children to Boston....