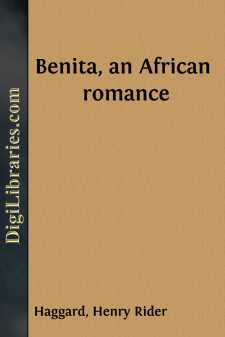 Beautiful, beautiful was that night! No air that stirred; the black smoke from the funnels of the mail steamer Zanzibar lay low over the surface of the sea like vast, floating ostrich plumes that vanished one by one in the starlight. Benita Beatrix Clifford, for that was her full name, who had been christened Benita after her mother and Beatrix after her father's only sister, leaning idly over the bulwark rail, thought to herself that a child might have sailed that sea in a boat of bark and come safely into port.

Then a tall man of about thirty years of age, who was smoking a cigar, strolled up to her. At his coming she moved a little as though to make room for him beside her, and there was something in the motion which, had anyone been there to observe it, might have suggested that these two were upon terms of friendship, or still greater intimacy. For a moment he hesitated, and while he did so an expression of doubt, of distress even, gathered on his face. It was as though he understood that a great deal depended on whether he accepted or declined that gentle invitation, and knew not which to do.

Indeed, much did depend upon it, no less than the destinies of both of them. If Robert Seymour had gone by to finish his cigar in solitude, why then this story would have had a very different ending; or, rather, who can say how it might have ended? The dread, foredoomed event with which that night was big would have come to its awful birth leaving certain words unspoken. Violent separation must have ensued, and even if both of them had survived the terror, what prospect was there that their lives would again have crossed each other in that wide Africa?

But it was not so fated, for just as he put his foot forward to continue his march Benita spoke in her low and pleasant voice.

"Are you going to the smoking-room or to the saloon to dance, Mr. Seymour? One of the officers just told me that there is to be a dance," she added, in explanation, "because it is so calm that we might fancy ourselves ashore."

"Neither," he answered. "The smoking-room is stuffy, and my dancing days are over. No; I proposed to take exercise after that big dinner, and then to sit in a chair and fall asleep. But," he added, and his voice grew interested, "how did you know that it was I? You never turned your head."

"I have ears in my head as well as eyes," she answered with a little laugh, "and after we have been nearly a month together on this ship I ought to know your step."

"I never remember that anyone ever recognized it before," he said, more to himself than to her, then came and leaned over the rail at her side. His doubts were gone. Fate had spoken.

For a while there was silence between them, then he asked her if she were not going to the dance.

"Why not? You are fond of dancing, and you dance very well. Also there are plenty of officers for partners, especially Captain——" and he checked himself.

"I know," she said; "it would be pleasant, but—Mr. Seymour, will you think me foolish if I tell you something?"

"I have never thought you foolish yet, Miss Clifford, so I don't know why I should begin now....