Ben Blair The Story of a Plainsman 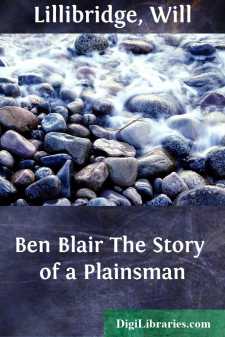 CHAPTER I IN RUDE BORDER-LAND

Even in a community where unsavory reputations were the rule, Mick Kennedy's saloon was of evil repute. In a land new and wild, his establishment was the wildest, partook most of the unsubdued, unevolved character of its surroundings. There, as irresistibly as gravitation calls the falling apple, came from afar and near—mainly from afar—the malcontent, the restless, the reckless, seeking—instinctively gregarious—the crowd, the excitement of the green-covered table, the temporary oblivion following the gulping of fiery red liquor.

Great splendid animals were the men who gathered there; hairy, powerful, strong-voiced from combat with prairie wind and frontier distance; devoid of a superfluous ounce of flesh, their trousers, uniformly baggy at the knees, bearing mute testimony to the many hours spent in the saddle; the bare unprotected skin of their hands and faces speaking likewise of constant contact with sun and storm.

By the broad glow of daylight the place was anything but inviting. The heavy bar, made of cottonwood, had no more elegance than the rude sod shanty of the pioneer. The worn round cloth-topped tables, imported at extravagant cost from the East, were covered with splashes of grease and liquor; and the few fly-marked pictures on the walls were coarsely suggestive. Scattered among them haphazard, in one instance through a lithographic print, were round holes as large as a spike-head, through which, by closely applying the eye, one could view the world without. When the place was new, similar openings had been carefully refilled with a whittled stick of wood, but the practice had been discontinued; it was too much trouble, and also useless from the frequency with which new holes were made. Besides, although accepted with unconcern by habitués of the place, they were a source of never-ending interest to the "tenderfeet" who occasionally appeared from nowhere and disappeared whence they had come.

But at night all was different. Encircling the room with gleaming points of light were a multitude of blazing candles, home-made from tallow of prairie cattle. The irradiance, almost as strong as daylight, but radically different, softened all surrounding objects. The prairie dust, penetrating with the wind, spread itself everywhere. The reflection from cheap glassware, carefully polished, made it appear of costly make; the sawdust of the floor seemed a downy covering; the crude heavy chairs, an imitation of the artistic furniture of our fathers. Even the face of bartender Mick, with its stiff unshaven red beard and its single eye,—merciless as an electric headlight,—its broad flaming scar leading down from the blank socket of its mate, became less repulsive under the softened light.

With the coming of Fall frosts, the premonition of Winter, the frequenters of the place gathered earlier, remained later, emptied more of the showily labelled bottles behind the bar, and augmented when possible their well-established reputation for recklessness. About the soiled tables the fringe of bleared faces and keen hawk-like eyes was more closely drawn. The dull rattle of poker-chips lasted longer, frequently far into the night, and even after the tardy light of morning had come to the rescue of the sputtering stumps in the candlesticks.

On such a morning, early in November, daylight broadened upon a characteristic scene. Only one table was in use, and around it sat four men. One by one the other players had cashed out and left the game. One of them was snoring in a corner, his head resting upon the sawdust. Another leaned heavily upon the bar, a half-drained glass before him. Even the four at the table were not as upon the night before. The hands which held the greasy cards and toyed with the stacks of chips were steady, but the heads controlling them wavered uncertainly; and the hawk eyes were bloodshot.

A man with a full beard, roughly trimmed into the travesty of a Vandyke, was dealing. He tossed out the cards, carefully inclining their faces downward, and returned the remainder of the pack softly to the table....