Behind the Beyond and Other Contributions to Human Knowledge 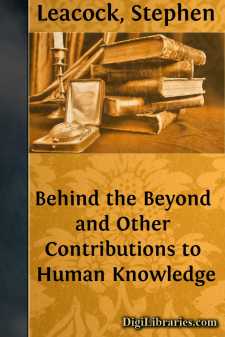 THE curtain rises, disclosing the ushers of the theater still moving up and down the aisles. Cries of "Program!" "Program!" are heard. There is a buzz of brilliant conversation, illuminated with flashes of opera glasses and the rattle of expensive jewelry.

Then suddenly, almost unexpectedly, in fact just as if done, so to speak, by machinery, the lights all over the theater, except on the stage, are extinguished. Absolute silence falls. Here and there is heard the crackle of a shirt front. But there is no other sound.

In this expectant hush, a man in a check tweed suit walks on the stage: only one man, one single man. Because if he had been accompanied by a chorus, that would have been a burlesque; if four citizens in togas had been with him, that would have been Shakespeare; if two Russian soldiers had walked after him, that would have been melodrama. But this is none of these. This is a problem play. So he steps in alone, all alone, and with that absolute finish of step, that ability to walk as if,—how can one express it?—as if he were walking, that betrays the finished actor.

He has, in fact, barely had time to lay down his silk hat, when he is completely betrayed. You can see that he is a finished actor—finished about fifteen years ago. He lays the hat, hollow side up, on the silk hat table on the stage right center—bearing north, northeast, half a point west from the red mica fire on the stage which warms the theater.

All this is done very, very quietly, very impressively. No one in the theater has ever seen a man lay a silk hat on a table before, and so there is a breathless hush. Then he takes off his gloves, one by one, not two or three at a time, and lays them in his hat. The expectancy is almost painful. If he had thrown his gloves into the mica fire it would have been a relief. But he doesn't.

The man on the stage picks up a pile of letters from the letter department of the hat table. There are a great many of these letters, because all his business correspondence, as well as his private letters, are sent here by the General Post Office. Getting his letters in this way at night, he is able to read them like lightning. Some of them he merely holds upside down for a fraction of a second.

Then at last he speaks. It has become absolutely necessary or he wouldn't do it. "So—Sao Paolo risen two—hum—Rio Tinto down again—Moreby anxious, 'better sell for half a million sterling'—hum . . ."

(Did you hear that? Half a million sterling and he takes it just as quietly as that. And it isn't really in the play either. Sao Paolo and Rio Tinto just come in to let you know the sort of man you're dealing with.)

(And mind you even this is just patter. The Ambassador doesn't come into the play either. He and Lady Gathorne are just put in to let the people in the cheaper seats know the kind of thing they're up against.)

Then the man steps across the stage and presses a button....