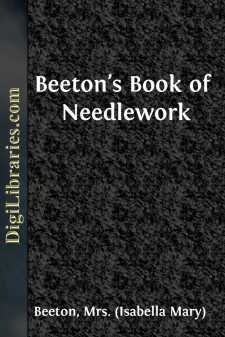 The needlework called Tatting in England, Frivolité in French, and Frivolitäten in German, is a work which seems, from all accounts, to have been in favour several generations ago. Modern ingenuity has discovered some ways of improving on the original plan of tatting, which was, indeed, rather a primitive sort of business as first practised. To Mrs. Mee, one of our most accomplished artistes in all matters connected with the work-table, belongs, we believe, the introduction of the plan of working from the reel instead of the shuttle. By this alteration the advantage of the shuttle being constantly kept filled with cotton was gained, and the necessity also obviated for frequently [ii] joining the thread; and to Mdlle. Riego, equally distinguished in all details appertaining to the employment of the needle, ladies are indebted for an arrangement by which the same thread used in the making of the pattern is used for fastening the work. The old plan only provided for the working of the different portions which constituted the pattern, and then these portions had to be sewn together with a needle and thread. The ingenious workers on the Continent have also given much attention of late to the art of tatting, and our instructions now printed comprise what we consider the best mode of learning and doing this exceedingly interesting and fashionable work.

Tatting differs entirely from crochet, and is composed of stitches forming knots. It is intended as an imitation of point lace, and is especially used for trimming under-linen, on account of its strength.

To make the stitches or knots a small instrument is used, called a shuttle. This shuttle consists of two oval pieces, flat on one side and convex on the other, and is made of wood or ivory.

The two oval pieces are joined together by a strong cross-piece. The illustration shows the construction of the shuttle. These shuttles are made in ivory, pearl, tortoiseshell inlaid with pearl, and silver; they are also manufactured in coloured bone, black, red, and white. The best to work with are the pearl for a white shuttle, and the inlaid tortoiseshell for a black shuttle; the prices vary from sixpence to one shilling and two-and-sixpence each. In selecting a shuttle be careful to see that the ends close, as if dropped it soon becomes unthreaded, which is very inconvenient. The cotton intended for the work is wound round this shuttle, and the thickness of the cotton varies according to the style of work. It is better to use the proper tatting cotton, because it is stronger than the ordinary kinds; this is manufactured by Messrs. Walter Evans and Co. for the purpose. Their Boar's Head Cotton is also frequently used, and answers very well.

The Way to Hold the Hands.

Take the shuttle in the right hand, between the thumb and second finger, and allow the forefinger to remain at liberty, and rest the under part of the shuttle between the second and third and on the middle finger....