Beauty and the Beast 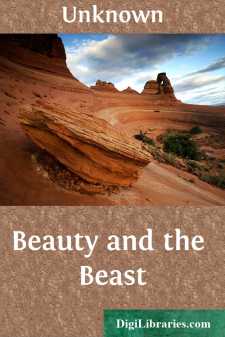 BEAUTY AND THE BEAST.

There was once a merchant who had been very rich at one time, but who, having had heavy losses, was compelled to retire to a little cottage in the country; where he lived with his three daughters. The two elder ones were very much discontented at their poverty, and were always grumbling and making complaints. But the youngest one, who was called Beauty, and who was as amiable as she was handsome, tried all she could to comfort her father and make his home happy.

Once, when he was going on a journey to try and mend his affairs, he called them around him, and asked them what he should bring them when he returned. The two elder ones wanted each a number of nice presents; but Beauty, kissing him sweetly, said she would be content with a rose. So when the merchant was on his way back, he came to an elegant garden, of which the gate stood open; and thinking of Beauty's rose, he went in, and plucking a beautiful one, prepared to proceed on his journey.

The Merchant and the Beast.

As he turned to go, he saw a hideous Beast coming towards him, armed with a sword! This terrible creature reproached him for stealing his flowers, of which he was very choice; and threatened to kill him on the spot! The merchant begged for his life, and said, that he had only taken “a single one to please his daughter Beauty.” On this, the beast said gruffly, “well, I will let you off, if you will bring one of your daughters here in your place. But she must come here willingly, and meanwhile you may stay and rest in my palace until to-morrow.” But, as you may well believe, the poor father did not feel much like eating or sleeping; although everything was done for his comfort, and, in the morning, the Beast sent him home upon a beautiful horse. But though the birds sang around him, and the sun shone brightly, and all nature was smiling on his path, the heart of the poor merchant was heavy, when he thought of his beloved daughters.

When he came near his home, his children came forth to meet him; but, seeing the sadness of his face, and his eyes filled with tears, they asked him the cause of his trouble. Giving the rose to Beauty, he told her all. The two elder sisters laid all the blame upon Beauty; who cried bitterly, and said that as she was the cause of her father's misfortune, she alone must suffer for it, and was quite willing to go. So Beauty got ready for the journey at once. The father (who meant to return to the Beast himself, after embracing his children) tried to dissuade her, but in vain; and so the two set out together for the Beast's palace, much to the secret joy of the envious sisters.

When they arrived at the palace, the doors opened of themselves, sweet music was heard, and they found an elegant supper prepared. As soon as they had refreshed themselves, the Beast entered, and said in a mild tone, “Beauty, did you come here willingly to take the place of your father?” “Yes, sir,” she answered in a sweet but trembling voice. “So much the better for you,” replied the Beast....