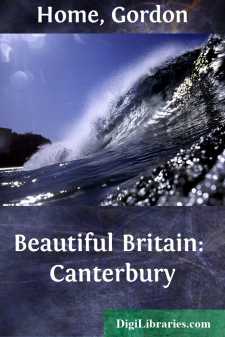 CHAPTER I THE PILGRIM'S APPROACH TO THE CITY

It was on April 24, 1538, that a writ of summons was sent forth in the name of Henry VIII., "To thee, Thomas Becket, some time Archbishop of Canterbury"-—who had then been dead for 368 years—-to appear within thirty days to answer to a charge of treason, contumacy, and rebellion against his sovereign lord, King Henry II. But the days passed, and no spirit having stirred the venerated bones of the wonder-working saint, on June 10 judgment was given in favour of Henry, and it was decreed that the Archbishop's bones were to be burnt, and his world-famous shrine overlaid with gold and sparkling with jewels was to be forfeited to the Crown. Further than this went the sentence, for Thomas of Canterbury was to be a saint no longer, and his name and memory were to be wiped out. The remains were not burned, but throughout the land every statue, wall-painting, and window to the said Thomas Becket was rigorously searched out and destroyed, and from every record his name was carefully erased. And so it came about that the year 1538 saw the last pilgrimage to the shrine of St. Thomas the Martyr.

A growing incredulity had prepared the way for this wave of iconoclasm, and the shrine once destroyed ended for ever this first phase of the Canterbury pilgrimages. It might have been truly thought, if anyone ever gave a moment to such speculations a century ago, when Englishmen cared little for the landmarks of their island story, that the last pilgrim who would ever wend his way along the old road to Canterbury had died in the sixteenth century, and yet how profoundly untrue would that impression have been in the light of the new enthusiasm for the site of the shrine! A considerable literature on the Pilgrims' Way from Winchester has already sprung up, and this little book is itself a souvenir for the pilgrim to carry away as evidence of the journey he has made, provided he cares to write inside the cover his name, the date of his visit, and the two words "at Canterbury."

Now, I do not disguise the fact that many of the twentieth-century pilgrims are not possessed of the true spirit of the devotee, and instead of approaching the object of their journey by the old-time way, along the beautiful hills of Surrey and Kent, they use the iron road which rushes them all unprepared into the city of the saint-martyr. But who will maintain that all those who formed the motley throng of the medieval pilgrimages came with their minds properly attuned, and who is prepared to say that because the majority of modern pilgrims consummate their aim by using the convenience of the railway they are less devout than Chaucer's merchant, serjeant-at-law, doctor of physic, and the rest who rode on horseback—the most convenient, rapid, and comfortable method of travel then available?

There is, however, a material disadvantage suffered by those who use the railway, in that they miss the first view of the Cathedral city set in the midst of soft-swelling eocene hills, which comes as the first stage of the gradual unfolding of the tragic story. The lukewarm pilgrim should therefore remember that he will add vastly to the richness of his impressions if he deserts his train at Selling or Chartham and walks the rest of the way over Harbledown, where he will see the little city of the Middle Ages encircled with its ancient wall and crowned by the towers of its cathedral very much as did the cosmopolitan groups of travel-soiled men and women who for century after century feasted their eyes from the selfsame spot.

CHRIST CHURCH GATEWAY, CANTERBURY.This beautiful entrance to the Cathedral precincts was built between 1507 and 1517. The richly sculptured stone has weathered exceedingly.

CHAPTER II THE STORY OF CANTERBURY

It would be a mistake to imagine that it solely was due to that bloody deed perpetrated on a certain December afternoon back in Norman times that Canterbury occupies a place of such pre-eminence in English history, for the city was ancient before the days of Thomas of Canterbury; and in this short chapter it is the writer's endeavour to indicate the position of that tragic occurrence in the chronology of the former Kentish capital....