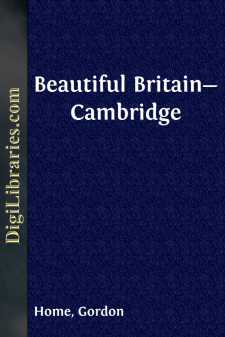 CHAPTER I SOME COMPARISONS

"…and so at noon with Sir Thomas Allen, and Sir Edward Scott and Lord Carlingford, to the Spanish Ambassador's, where I dined the first time…. And here was an Oxford scholar, in a Doctor of Laws' gowne…. And by and by he and I to talk; and the company very merry at my defending Cambridge against Oxford."—PEPYS' Diary (May 5, 1669).

In writing of Cambridge, comparison with the great sister university seems almost inevitable, and, since it is so usual to find that Oxford is regarded as pre-eminent on every count, we are tempted to make certain claims for the slightly less ancient university. These claims are an important matter if Cambridge is to hold its rightful position in regard to its architecture, its setting, and its atmosphere. Beginning with the last, we do not hesitate to say that there is a more generally felt atmosphere of repose, such as the mind associates with the best of our cathedral cities, in Cambridge than is to be enjoyed in the bigger and busier university town. This is in part due to Oxford's situation on a great artery leading from the Metropolis to large centres of population in the west; while Cambridge, although it grew up on a Roman road of some importance, is on the verge of the wide fenlands of East Anglia, and, being thus situated off the trade-ways of England, has managed to preserve more of that genial and scholarly repose we would always wish to find in the centres of learning, than has the other university.

Then this atmosphere is little disturbed by the modern accretions to the town. On the east side, it is true, there are new streets of dull and commonplace terraces, which one day an awakened England will wipe out; there are other elements of ugly sordidness, which the lack of a guiding and controlling authority, and the use of distressingly hideous white bricks, has made possible, but it is quite conceivable that a visitor to the town might spend a week of sight-seeing in the place without being aware of these shortcomings. This fortunate circumstance is due to the truly excellent planning of Cambridge. It is not for a moment suggested that the modern growth of the place is ideal, but what is new and unsightly is so placed that it does not interfere with the old and beautiful. The real Cambridge is so effectively girdled with greens and commons, and college grounds shaded with stately limes, elms, and chestnuts, that there are never any jarring backgrounds to destroy the sense of aloofness from the ugly and untidy elements of nineteenth-century individualism which are so often conspicuous at Oxford.

Cambridge has also made better use of her river than has her sister university; she has taken it into her confidence, bridged it in a dozen places, and built her colleges so that the waters mirror some of her most beautiful buildings. Further than this, in the glorious chapel Henry VI. built for King's College, Cambridge possesses one of the three finest Perpendicular chapels in the country—a feature Oxford cannot match, and in the church of the Holy Sepulchre Cambridge boasts the earliest of the four round churches of the Order of the Knights Templars which survive at this day....