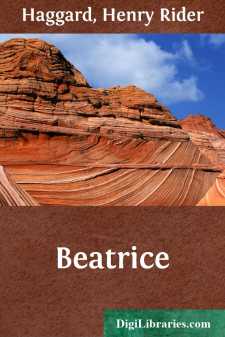 The autumn afternoon was fading into evening. It had been cloudy weather, but the clouds had softened and broken up. Now they were lost in slowly darkening blue. The sea was perfectly and utterly still. It seemed to sleep, but in its sleep it still waxed with the rising tide. The eye could not mark its slow increase, but Beatrice, standing upon the farthest point of the Dog Rocks, idly noted that the long brown weeds which clung about their sides began to lift as the water took their weight, till at last the delicate pattern floated out and lay like a woman's hair upon the green depth of sea. Meanwhile a mist was growing dense and soft upon the quiet waters. It was not blown up from the west, it simply grew like the twilight, making the silence yet more silent and blotting away the outlines of the land. Beatrice gave up studying the seaweed and watched the gathering of these fleecy hosts.

"What a curious evening," she said aloud to herself, speaking in a low full voice. "I have not seen one like it since mother died, and that is seven years ago. I've grown since then, grown every way," and she laughed somewhat sadly, and looked at her own reflection in the quiet water.

She could not have looked at anything more charming, for it would have been hard to find a girl of nobler mien than Beatrice Granger as on this her twenty-second birthday, she stood and gazed into that misty sea.

Of rather more than middle height, and modelled like a statue, strength and health seemed to radiate from her form. But it was her face with the stamp of intellect and power shadowing its woman's loveliness that must have made her remarkable among women even more beautiful than herself. There are many girls who have rich brown hair, like some autumn leaf here and there just yellowing into gold, girls whose deep grey eyes can grow tender as a dove's, or flash like the stirred waters of a northern sea, and whose bloom can bear comparison with the wilding rose. But few can show a face like that which upon this day first dawned on Geoffrey Bingham to his sorrow and his hope. It was strong and pure and sweet as the keen sea breath, and looking on it one must know that beneath this fair cloak lay a wit as fair. And yet it was all womanly; here was not the hard sexless stamp of the "cultured" female. She who owned it was capable of many things. She could love and she could suffer, and if need be, she could dare or die. It was to be read upon that lovely brow and face, and in the depths of those grey eyes—that is, by those to whom the book of character is open, and who wish to study it.

But Beatrice was not thinking of her loveliness as she gazed into the water. She knew that she was beautiful of course; her beauty was too obvious to be overlooked, and besides it had been brought home to her in several more or less disagreeable ways.

"Seven years," she was thinking, "since the night of the 'death fog;' that was what old Edward called it, and so it was. I was only so high then," and following her thoughts she touched herself upon the breast....