Base-Ball How to Become a Player 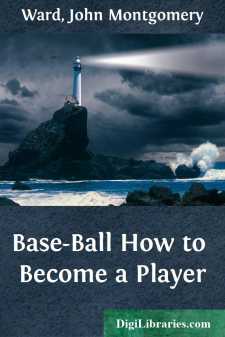 INTRODUCTION. AN INQUIRY INTO THE ORIGIN OF BASE-BALL, WITH A BRIEF SKETCH OF ITS HISTORY.

It may or it may not be a serious reflection upon the accuracy of history that the circumstances of the invention of the first ball are enveloped in some doubt. Herodotus attributes it to the Lydians, but several other writers unite in conceding to a certain beautiful lady of Corcyra, Anagalla by name, the credit of first having made a ball for the purpose of pastime. Several passages in Homer rather sustain this latter view, and, therefore, with the weight of evidence, and to the glory of woman, we, too, shall adopt this theory. Anagalla did not apply for letters patent, but, whether from goodness of heart or inability to keep a secret, she lost no time in making known her invention and explaining its uses. Homer, then, relates how:

"O'er the green mead the sporting virgins play, Their shining veils unbound; along the skies, Tost and retost, the ball incessant flies."

And this is the first ball game on record, though it is perhaps unnecessary to say that it was not yet base-ball.

No other single accident has ever been so productive of games as that invention. From the day when the Phaeacian maidens started the ball rolling down to the present time, it has been continuously in motion, and as long as children love play and adults feel the need of exercise and recreation, it will continue to roll. It has been known in all lands, and at one time or another been popular with all peoples. The Greeks and the Romans were great devotees of ball-play; China was noted for her players; in the courts of Italy and France, we are told, it was in especial favor, and Fitz-Stephen, writing in the 13th century, speaks of the London schoolboys playing at "the celebrated game of ball."

For many centuries no bat was known, but in those games requiring the ball to be struck, the hand alone was used. In France there was early played a species of hand-ball. To protect the hands thongs were sometimes bound about them, and this eventually furnished the idea of the racquet. Strutt thinks a bat was first used in golf, cambuc, or bandy ball. This was similar to the boys' game of "shinny," or, as it is now more elegantly known, "polo," and the bat used was bent at the end, just as now. The first straight bats were used in the old English game called club ball. This was simply "fungo hitting," in which one player tossed the ball in the air and hit it, as it fell, to others who caught it, or sometimes it was pitched to him by another player.

Concerning the origin of the American game of base-ball there exists considerable uncertainty. A correspondent of Porter's Spirit of the Times, as far back as 1856, begins a series of letters on the game by acknowledging his utter inability to arrive at any satisfactory conclusion upon this point; and a writer of recent date introduces a research into the history of the game with the frank avowal that he has only succeeded in finding "a remarkable lack of literature on the subject."

In view of its extraordinary growth and popularity as "Our National Game," the author deems it important that its true origin should, if possible, be ascertained, and he has, therefore, devoted to this inquiry more space than might at first seem necessary....