by Saint John of Damascus 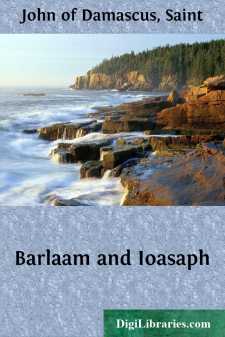 The country of the Indians, as it is called, is vast and populous, lying far beyond Egypt. On the side of Egypt it is washed by seas and navigable gulphs, but on the mainland it marcheth with the borders of Persia, a land formerly darkened with the gloom of idolatry, barbarous to the last degree, and wholly given up to unlawful practices. But when "the only-begotten Son of God, which is in the bosom of the Father," being grieved to see his own handiwork in bondage unto sin, was moved with compassion for the same, and shewed himself amongst us without sin, and, without leaving his Father's throne, dwelt for a season in the Virgin's womb for our sakes, that we might dwell in heaven, and be re-claimed from the ancient fall, and freed from sin by receiving again the adoption of sons; when he had fulfilled every stage of his life in the flesh for our sake, and endured the death of the Cross, and marvellously united earth and heaven; when he had risen again from the dead, and had been received up into heaven, and was seated at the right hand of the majesty of the Father, whence, according to his promise, he sent down the Comforter, the Holy Ghost, unto his eyewitnesses and disciples, in the shape of fiery tongues, and despatched them unto all nations, for to give light to them that sat in the darkness of ignorance, and to baptize them in the Name of the Father, and of the Son, and of the Holy Ghost, whereby it fell to the lot of some of the Apostles to travel to the far-off East and to some to journey to the West-ward, while others traversed the regions North and South, fulfilling their appointed tasks then it was, I say, that one of the company of Christ's Twelve Apostles, most holy Thomas, was sent out to the land of the Indians, preaching the Gospel of Salvation. "The Lord working with him and confirming the word with signs following," the darkness of superstition was banished; and men were delivered from idolatrous sacrifices and abominations, and added to the true Faith, and being thus transformed by the hands of the Apostle, were made members of Christ's household by Baptism, and, waxing ever with fresh increase, made advancement in the blameless Faith and built churches in all their lands.

Now when monasteries began to be formed in Egypt, and numbers of monks banded themselves together, and when the fame of their virtues and Angelic conversation "was gone out into all the ends of the world" and came to the Indians, it stirred them up also to the like zeal, insomuch that many of them forsook everything and withdrew to the deserts; and, though but men in mortal bodies, adopted the spiritual life of Angels. While matters were thus prospering and many were soaring upward to heaven on wings of gold, as the saying is, there arose in that country a king named Abenner, mighty in riches and power, and in victory over his enemies, brave in warfare, vain of his splendid stature and comeliness of face, and boastful of all worldly honours, that pass so soon away....