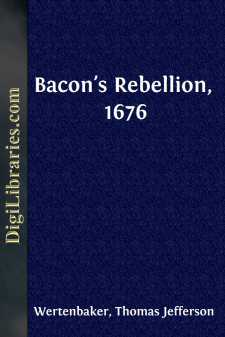 The months just preceding the year 1676 were marked in Virginia by ominous signs of disaster. A great comet streamed through the sky "like a horsetail," and it was well known that that meant pestilence or war. Then came tens of thousands of pigeons, stretching across the sky as far as the eye could see. They were followed by vast swarms of what seem to have been cicadas, which rose out of the ground, ate the fresh leaves of the trees, and then disappeared. So those who believed in omens were not surprised when the year was marked by the greatest catastrophe in the history of the colony.

But to understand what happened it is necessary to go back thirty-five years to the appointment by Charles I of Sir William Berkeley as Governor of Virginia. No doubt the King considered this an especial act of grace to the colony, for Berkeley was a member of the Privy Chamber, and as such lived in the royal palace. It was this, perhaps, which fired him with an intense loyalty for the House of Stuart which endured to the day of his death. To dispute the omnipotence of the king was in his eyes the darkest of crimes. A Master of Arts at Oxford, a writer of some merit, polished in manner, he seemed out of place in the forests of Virginia. Perhaps it was his passion to rule which brought him to the colony, perhaps it was cupidity, for he accumulated there a fortune of considerable size.

He had been in Virginia but a few months when word reached him of the outbreak of the Civil War in England. He must have been horrified that anyone should dare to take up arms against the sacred person of the King, and he sought permission to return to England to defend him. So, in the summer of 1644, when Charles was bearing down on the Parliamentary forces under Essex in Cornwall, Berkeley was with him. And he looked on with deep satisfaction as Sir Richard Grenville ransacked Lord Roberts' house at Lanhydrock, eight miles north of Fowey, and made off with silver plate worth £2000.

It was probably soon after this that word came of the terrible Indian massacre of April 18, 1644, for Berkeley was back in Virginia on June 7, 1645. Placing himself at the head of the forces which had been bringing fire and destruction to the Indian villages, he soon forced the savages to seek refuge in the woods and swamps. After he had captured their aged chief Opechancanough, they sued for peace.

Upon receiving news of the execution of Charles I, Sir William proclaimed Charles II King. And when, in 1652, a Parliamentary fleet sailed up the James to reduce the colony, he summoned the militia and prepared for a stubborn resistance. It was only when his Council pointed out the folly of defying the might of Britain that he reluctantly agreed to surrender. But his soul was filled with bitterness. So, with the restoration of Charles II to the throne, when once more he was governor of Virginia, he was determined to permit no more of representative government than his commission and instructions made necessary....