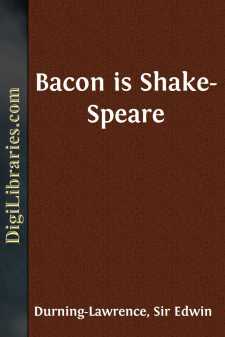 The plays known as Shakespeare's are at the present time universally acknowledged to be the "Greatest birth of time," the grandest production of the human mind. Their author also is generally recognised as the greatest genius of all the ages. The more the marvellous plays are studied, the more wonderful they are seen to be.

Classical scholars are amazed at the prodigious amount of knowledge of classical lore which they display. Lawyers declare that their author must take rank among the greatest of lawyers, and must have been learned not only in the theory of law, but also intimately acquainted with its forensic practice. In like manner, travellers feel certain that the author must have visited the foreign cities and countries which he so minutely and graphically describes.

It is true that at a dark period for English literature certain critics denied the possibility of Bohemia being accurately described as by the sea, and pointed out the "manifest absurdity" of speaking of the "port" at Milan; but a wider knowledge of the actual facts has vindicated the author at the expense of his unfortunate critics. It is the same with respect to other matters referred to in the plays. The expert possessing special knowledge of any subject invariably discovers that the plays shew that their author was well acquainted with almost all that was known at the time about that particular subject.

And the knowledge is so extensive and so varied that it is not too much to say that there is not a single living man capable of perceiving half of the learning involved in the production of the plays. One of the greatest students of law publicly declared, while he was editor of the Law Times, that although he thought that he knew something of law, yet he was not ashamed to confess that he had not sufficient legal knowledge or mental capacity to enable him to fully comprehend a quarter of the law contained in the plays.

Of course, men of small learning, who know very little of classics and still less of law, do not experience any of these difficulties, because they are not able to perceive how great is the vast store of learning exhibited in the plays.

There is also shewn in the plays the most perfect knowledge of Court etiquette, and of the manners and the methods of the greatest in the land, a knowledge which none but a courtier moving in the highest circles could by any possibility have acquired.

In his diary, Wolfe Tone records that the French soldiers who invaded Ireland behaved exactly like the French soldiers are described as conducting themselves at Agincourt in the play of "Henry V," and he exclaims, "It is marvellous!" (Wolfe Tone also adds that Shakespeare could never have seen a French soldier, but we know that Bacon while in Paris had had considerable experience of them.)

The mighty author of the immortal plays was gifted with the most brilliant genius ever conferred upon man. He possessed an intimate and accurate acquaintance, which could not have been artificially acquired, with all the intricacies and mysteries of Court life. He had by study obtained nearly all the learning that could be gained from books. And he had by travel and experience acquired a knowledge of cities and of men that has never been surpassed.

Who was in existence at that period who could by any possibility be supposed to be this universal genius?...