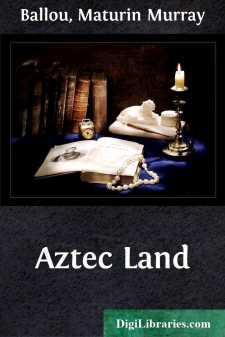 Bordering upon the United States on the extreme southwest, for a distance of more than two thousand miles, is a republic which represents a civilization possibly as old as that of Egypt; a land, notwithstanding its proximity to us, of which the average American knows less than he does of France or Italy, but which rivals them in natural picturesqueness, and nearly equals them in historic interest.

It is a country which is much misunderstood and almost wholly misrepresented. It may be called the land of tradition and romance, whose true story is most poetic and sanguinary. Such is Mexico, with her twenty-seven independent states, a federal district in which is situated the national capital, and the territory of Lower California,—a widespread country, containing in all a population of between ten and eleven millions. As in the instance of this Union, each state controls its internal affairs so far as it can do so without conflicting with the laws of the national government, which are explicitly defined. The nature of the constitution, adopted in 1857 by the combined states, is that of a republic pure and simple, thoroughly democratic in its provisions. The national power resides in the people, from whom emanates all public authority. The glowing pen of Prescott has rendered us all familiar with the romantic side of Mexican history, but legitimate knowledge of her primitive story is, unfortunately, of the most fragmentary character. Our information concerning the early inhabitants comes almost solely through the writings of irresponsible monks and priests who could neither see nor represent anything relative to an idolatrous people save in accordance with the special interests of their own church; or from Spanish historians who had never set foot upon the territory of which they wrote, and who consequently repeated with heightened color the legends, traditions, and exaggerations of others. "The general opinion may be expressed," says Janvier, in his "Mexican Guide," "in regard to the writings concerning this period that, as a rule, a most gorgeous superstructure of fancy has been raised upon a very meagre foundation of fact. As romance, information of this highly imaginative sort is entertaining, but it is not edifying." One would be glad to get at the other side of the Aztec story, which, we suspect, would place the chivalric invaders in a very different light from that of their own boastful records, and also enable us to form a more just and truthful opinion of the aborigines themselves....