Aviation in Peace and War 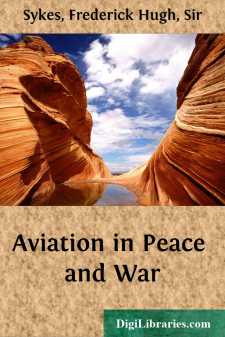 Since the earliest communities of human beings first struggled for supremacy and protection, the principles of warfare have remained unchanged. New methods have been evolved and adopted with the progress of science, but no discovery, save perhaps that of gunpowder, has done so much in so short a time to revolutionize the conduct of war as aviation, the youngest, yet destined perhaps to be the most effective fighting-arm. Yet to-day we are only on the threshold of our knowledge, and, striking as was the impetus given to every branch of aeronautics during the four years of war, its future power can only dimly be seen.

We may indeed feel anxious about this great addition of aviation to the destructive power of modern scientific warfare. Bearing its terrors in mind, we may even impotently seek to check its advance, but the appeal of flying is too deep, its elimination is now impossible, and granted that war is inevitable, it must be accepted for good or ill. Fortunately, although with the other great scientific additions, chemical warfare and the submarine, its potentialities for destruction are very great, yet aircraft, unlike the submarine, can be utilized not only in the conduct of war but in the interests of peace, and it is here that we can guide and strengthen it for good. Just as the naval supremacy of Britain was won because commercially we were the greatest seafaring people in the world, so will air supremacy be achieved by that country which, making aviation a part of its everyday life, becomes an airfaring community.

Our nation as a whole has been educated, owing to its geographical situation and by tradition, to interest itself in the broader aspects of marine policy and development. It requires to take the same interest in aviation, a comparatively new subject, unhampered to a great extent by preconceived notions and therefore offering greater scope for individual thought.

The following sketch has been written in the hope that some of those who read it may be inspired to study aviation in one or other of its branches, whether from the historical, technical, strategical, or commercial point of view. Any opinions expressed are, of course, my own and not official.

First written and delivered as the Lees-Knowles Lectures at Cambridge University in February and March, 1921.

I propose first briefly to trace the history of aviation from its beginnings to the outbreak of war; next to describe the evolution of aircraft and of air strategy during the war; and last to estimate the present position and to look into the future.

The story of the growth of aviation may be likened to that of the discovery and opening up of a new continent. A myth arises, whence no one can tell, of the existence of a new land across the seas. Eventually this land is found without any realization of the importance of the discovery. Then comes the period of colonization and increasing knowledge. But the interior remains unexplored....