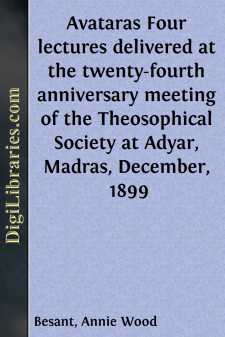 Brothers:—Every time that we come here together to study the fundamental truths of all religions, I cannot but feel how vast is the subject, how small the expounder, how mighty the horizon that opens before our thoughts, how narrow the words which strive to sketch it for your eyes. Year after year we meet, time after time we strive to fathom some of those great mysteries of life, of the Self, which form the only subject really worthy of the profoundest thought of man. All else is passing; all else is transient; all else is but the toy of a moment. Fame and power, wealth and science—all that is in this world below is as nothing beside the grandeur of the Eternal Self in the universe and in man, one in all His manifold manifestations, marvellous and beautiful in every form that He puts forth. And this year, of all the manifestations of the Supreme, we are going to dare to study the holiest of the holiest, those manifestations of God in the world in which He shows Himself as divine, coming to help the world that He has made, shining forth in His essential nature, the form but a thin film which scarce veils the Divinity from our eyes. How then shall we venture to approach it, how shall we dare to study it, save with deepest reverence, with profoundest humility; for if there needs for the study of His works patience, reverence and humbleness of heart, what when we study Him whose works but partially reveal Him, when we try to understand what is meant by an Avatâra, what is the meaning, what the purpose of such a revelation?

Our President has truly said that in all the faiths of the world there is belief in such manifestations, and that ancient maxim as to truth—that which is as the hall mark on the silver showing that the metal is pure—that ancient maxim is here valid, that whatever has been believed everywhere, whatever has been believed at every time, and by every one, that is true, that is reality. Religions quarrel over many details; men dispute over many propositions; but where human heart and human voice speak a single word, there you have the mark of truth, there you have the sign of spiritual reality. But in dealing with the subject one difficulty faces us, faces you as hearers, faces myself as speaker. In every religion in modern times truth is shorn of her full proportions; the intellect alone cannot grasp the many aspects of the one truth. So we have school after school, philosophy after philosophy, each one showing an aspect of truth, and ignoring, or even denying, the other aspects which are equally true. Nor is this all; as the age in which we are passes on from century to century, from millennium to millennium, knowledge becomes dimmer, spiritual insight becomes rarer, those who repeat far out-number those who know; and those who speak with clear vision of the spiritual verity are lost amidst the crowds, who only hold traditions whose origin they fail to understand. The priest and the prophet, to use two well-known words, have ever in later times come into conflict one with the other....