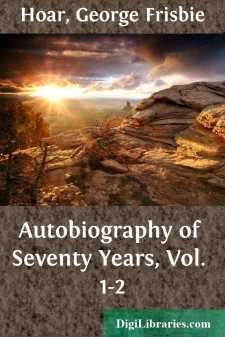 Everybody who reads this book through will wonder that a man who ought to be able to tell so much has really told so little.

In my younger days there were among my kindred and near friends persons who knew the great actors of the Revolutionary time and the time which followed till I came to manhood myself. But I did not know enough to ask questions. If I had, and had recorded the answers, I could write a very large part of the political and literary history of the United States. I never kept a diary, except for a few and brief periods. So for what I have to say, I must trust to my memory. I have no doubt that after these volumes are published, there will come up in my mind matter enough to make a dozen better ones.

I invoke for this book that kindly judgment of my countrymen which has attended everything I have done in my life so far. I have tried to guard against the dangers and the besetting infirmities of men who write their own biography. An autobiography, as the word implies, will be egotistical. An old man's autobiography is pretty certain to be garrulous. If the writer set forth therein his own ideals, he is likely to be judged by them, even when he may fall far short of them. Men are likely to think that he claims or pretends to have lived up to them, however painfully conscious he may be that they are only dreams which even if he have done his best have had little reality for him.

There is another danger for a man who tells the story of great transactions, in which he has taken part, whether legislative, executive, military, or political, or any other, in which the combined action of many persons was required for the result. He is apt to claim, consciously or unconsciously, that he himself brought the whole thing about.

"Papa," said the little boy to the veteran of the Civil War,"Did anybody help you to put down the Rebellion?"

This peril specially besets narrators in their old age. I am afraid I can hardly escape it.

I once heard General George H. Thomas relate to a brilliant company at a supper party, among whom were Chief Justice Chase, General Eaton, Commissary General in two wars, Senator Trumbull, William M. Evarts, Joseph Henry, John Sherman, his brother the General, and several other gentlemen of equal distinction, the story of the battles of Nashville and Franklin. The story was full of dramatic interest. Yet no one who heard it would have known that the speaker himself had taken part in the great achievement, until, just at the end, he said of the Battle of Nashville that he thought of sending a detachment to cut off Hood's army at a ford by which he escaped after they were defeated, but he concluded that it was not safe to spare that force from immediate use in the battle....