Autobiography of Ma-ka-tai-me-she-kia-kiak, or Black Hawk 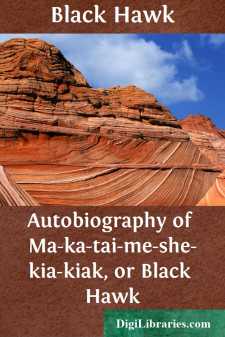 SIR—The changes of fortune and vicissitudes of war made you my conqueror. When my last resources were exhausted, my warriors worn down with long and toilsome marches, we yielded, and I became your prisoner.

The story of my life is told in the following pages: it is intimately connected, and in some measure, identified, with a part of the history of your own: I have, therefore, dedicated it to you.

The changes of many summers have brought old age upon me, and I can not expect to survive many moons. Before I set out on my journey to the land of my fathers, I have determined to give my motives and reasons for my former hostilities to the whites, and to vindicate my character from misrepresentation. The kindness I received from you whilst a prisoner of war assures me that you will vouch for the facts contained in my narrative, so far as they came under your observation.

I am now an obscure member of a nation that formerly honored and respected my opinions. The pathway to glory is rough, and many gloomy hours obscure it. May the Great Spirit shed light on yours, and that you may never experience the humility that the power of the American government has reduced me to, is the wish of him, who, in his native forests, was once as proud and bold as yourself.

It is presumed that no apology will be required for presenting to the public the life of a Hero who has lately taken such high rank among the distinguished individuals of America. In the following pages he will be seen in the character of a Warrior, a Patriot and a State prisoner; in every situation he is still the chief of his Band, asserting their rights with dignity, firmness and courage. Several accounts of the late war having been published, in which he thinks justice is not done to himself or nation, he determined to make known to the world the injuries his people have received from the whites, the causes which brought on the war on the part of his nation, and a general history of it throughout the campaign. In his opinion this is the only method now left him to rescue his little Band, the remnant of those who fought bravely with him, from the effects of the statements that have already gone forth.

The facts which he states, respecting the Treaty of 1804, in virtue of the provisions of which the government claimed the country in dispute and enforced its arguments with the sword, are worthy of attention. It purported to cede tot he United States all of the country, including the village and corn-fields of Black Hawk and his band, on the east side of the Mississippi. Four individuals of the tribe, who were on a visit to St. Louis to obtain the liberation of on of their people from prison, were prevailed upon, says Black Hawk, to make this important treaty, without the knowledge or authority of the tribes, or nation.

In treating with the Indians for their country, it has always been customary to assemble the whole nation; because, as has been truly suggested by the Secretary of War, the nature of the authority of the chiefs of the tribe is such, that it is not often that they dare make a treaty of much consequence, and we might add, never, when involving so much magnitude as the one under consideration, without the presence of their young men....