Autobiography of Frank G. Allen, Minister of the Gospel and Selections from his Writings 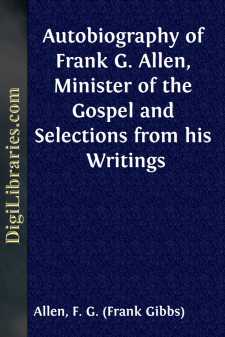 By prescription, which often has the force of law, a book should have both a Preface and an Introduction: the first relating to the writer; the second to the things written. I may well dispense with the latter, for what is here written the humblest capacity can understand; and it would be cruel to detain him long on the porch who is anxious to enter the building.

But, dear reader, a word with you (for that is the meaning of "Preface") before you begin this unpretentious little book, the joint production of an author, an editor, and a publisher.

It is due the first, to say that he wrote what is here called his Autobiography in great physical weakness, and without expecting that it would appear in this form. This will account for its homely garb, and apologize for it, if apology be necessary. Frank Allen had no time to spend upon mere style in anything he wrote. He aimed at clearness and force of expression, and reached these in a remarkable degree in his latter days. If any one, therefore, should take up this volume expecting to find literary entertainment, he will have the search for his pains; but if he seeks for what is far better, the secret of a life devoted to God and goodness, told in plain, unvarnished English, he will not be disappointed.

When I received from the gifted author the record of his "travel's history," I intended to write his Life, but death came and found us, not him, unprepared; and so, under the constraint of other and pressing duties, my purpose was reluctantly abandoned. Besides, upon examination it was found that with a few changes and additions here and there, these memoranda, as they came from the hand of their author, could, under the circumstances, appear in that form and do him no discredit.

Such is my admiration of this noble man, and such my deference to what I am sure must be the desire of his friends, that I have preferred to let him tell in simple phrase the strange story of his struggles and triumphs; and if its perusal should give the reader half the pleasure it has been to me to prepare it for the press, I shall not have labored in vain. The book is intended to be a Memorial Volume, and especially one to encourage young men who, under adverse circumstances, are striving to qualify themselves to preach the gospel. Bro. Allen was always in warm and loving sympathy with these—so much so, that he was rightly called the young preacher's friend.

It is a pleasure to say that such is the veneration of the publishers, The Guide Printing and Publishing Company, for the memory of our deceased brother, that but for them this tribute would hardly have appeared. With a generosity as rare as it is praiseworthy, they have undertaken to publish the work in the best style of their art, at a low price, and without any pecuniary risk to Sister Allen; and, indeed, in all their transactions with her they have given abundant proof that men can carry into business the benevolent spirit of pure and undefiled religion.

It only remains to be said that whatever profits arise from the sale of this book go to the wife and children of its lamented author, and that should sufficient encouragement be given, a companion volume containing the letters and miscellaneous productions of Bro....