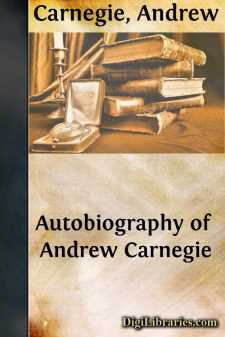 CHAPTER I PARENTS AND CHILDHOOD

IF the story of any man's life, truly told, must be interesting, as some sage avers, those of my relatives and immediate friends who have insisted upon having an account of mine may not be unduly disappointed with this result. I may console myself with the assurance that such a story must interest at least a certain number of people who have known me, and that knowledge will encourage me to proceed.

A book of this kind, written years ago by my friend, Judge Mellon, of Pittsburgh, gave me so much pleasure that I am inclined to agree with the wise one whose opinion I have given above; for, certainly, the story which the Judge told has proved a source of infinite satisfaction to his friends, and must continue to influence succeeding generations of his family to live life well. And not only this; to some beyond his immediate circle it holds rank with their favorite authors. The book contains one essential feature of value—it reveals the man. It was written without any intention of attracting public notice, being designed only for his family. In like manner I intend to tell my story, not as one posturing before the public, but as in the midst of my own people and friends, tried and true, to whom I can speak with the utmost freedom, feeling that even trifling incidents may not be wholly destitute of interest for them.

To begin, then, I was born in Dunfermline, in the attic of the small one-story house, corner of Moodie Street and Priory Lane, on the 25th of November, 1835, and, as the saying is, "of poor but honest parents, of good kith and kin." Dunfermline had long been noted as the center of the damask trade in Scotland. My father, William Carnegie, was a damask weaver, the son of Andrew Carnegie after whom I was named.

My Grandfather Carnegie was well known throughout the district for his wit and humor, his genial nature and irrepressible spirits. He was head of the lively ones of his day, and known far and near as the chief of their joyous club—"Patiemuir College." Upon my return to Dunfermline, after an absence of fourteen years, I remember being approached by an old man who had been told that I was the grandson of the "Professor," my grandfather's title among his cronies. He was the very picture of palsied eld;

"His nose and chin they threatened ither."

As he tottered across the room toward me and laid his trembling hand upon my head he said: "And ye are the grandson o' Andra Carnegie! Eh, mon, I ha'e seen the day when your grandfaither and I could ha'e hallooed ony reasonable man oot o' his jidgment."

Several other old people of Dunfermline told me stories of my grandfather. Here is one of them:

One Hogmanay night an old wifey, quite a character in the village, being surprised by a disguised face suddenly thrust in at the window, looked up and after a moment's pause exclaimed, "Oh, it's jist that daft callant Andra Carnegie." She was right; my grandfather at seventy-five was out frightening his old lady friends, disguised like other frolicking youngsters.

I think my optimistic nature, my ability to shed trouble and to laugh through life, making "all my ducks swans," as friends say I do, must have been inherited from this delightful old masquerading grandfather whose name I am proud to bear. A sunny disposition is worth more than fortune. Young people should know that it can be cultivated; that the mind like the body can be moved from the shade into sunshine. Let us move it then. Laugh trouble away if possible, and one usually can if he be anything of a philosopher, provided that self-reproach comes not from his own wrongdoing. That always remains. There is no washing out of these "damned spots." The judge within sits in the supreme court and can never be cheated. Hence the grand rule of life which Burns gives:

"Thine own reproach alone do fear."

This motto adopted early in life has been more to me than all the sermons I ever heard, and I have heard not a few, although I may admit resemblance to my old friend Baillie Walker in my mature years. He was asked by his doctor about his sleep and replied that it was far from satisfactory, he was very wakeful, adding with a twinkle in his eye: "But I get a bit fine doze i' the kirk noo and then."

On my mother's side the grandfather was even more marked, for my grandfather Thomas Morrison was a friend of William Cobbett, a contributor to his "Register," and in constant correspondence with him....