Autobiography, Letters and Literary Remains of Mrs. Piozzi (Thrale) (2nd ed.) (2 vols.) Edited with notes and Introductory Account of her life and writings 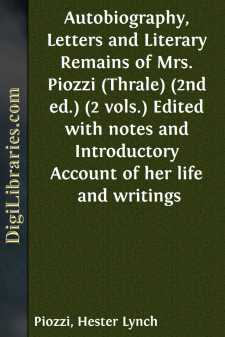 Dr. Johnson was hailed the colossus of Literature by a generation who measured him against men of no common mould—against Hume, Robertson, Gibbon, Warburton, the Wartons, Fielding, Richardson, Smollett, Gray, Goldsmith, and Burke. Any one of these may have surpassed the great lexicographer in some branch of learning or domain of genius; but as a man of letters, in the highest sense of the term, he towered pre-eminent, and his superiority to each of them (except Burke) in general acquirements, intellectual power, and force of expression, was hardly contested by his contemporaries. To be associated with his name has become a title of distinction in itself; and some members of his circle enjoy, and have fairly earned, a peculiar advantage in this respect. In their capacity of satellites revolving round the sun of their idolatry, they attracted and reflected his light and heat. As humble companions of their Magnolia grandiflora, they did more than live with it[1]; they gathered and preserved the choicest of its flowers. Thanks to them, his reputation is kept alive more by what has been saved of his conversation than by his books; and his colloquial exploits necessarily revive the memory of the friends (or victims) who elicited and recorded them.

If the two most conspicuous among these have hitherto gained notoriety rather than what is commonly understood by fame, a discriminating posterity is already beginning to make reparation for the wrong. Boswell's "Letters to Temple," edited by Mr. Francis, with "Boswelliana," printed for the Philobiblion Society by Mr. Milnes, led, in 1857, to a revisal of the harsh sentence passed on one whom the most formidable of his censors, Lord Macaulay, has declared to be not less decidedly the first of biographers, than Homer is the first of heroic poets, Shakspeare the first of dramatists, or Demosthenes the first of orators. The result was favourable to Boswell, although the vulnerable points of his character were still more glaringly displayed. The appeal about to be hazarded on behalf of Mrs. Piozzi, will involve little or no risk of this kind. Her ill-wishers made the most of the event which so injuriously affected her reputation at the time of its occurrence; and the marked tendency of every additional disclosure of the circumstances has been to elevate her. No candid person will read her Autobiography, or her Letters, without arriving at the conclusion that her long life was morally, if not conventionally, irreproachable; and that her talents were sufficient to confer on her writings a value and attraction of their own, apart from what they possess as illustrations of a period or a school. When the papers which form the basis of this work were laid before Lord Macaulay, he gave it as his opinion that they afforded materials for a "most interesting and durably popular volume."[1]