Authentic Narrative of the Death of Lord Nelson 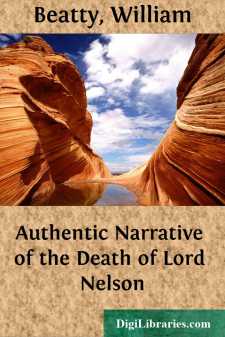 Lord NELSON sailed from St. Helen's in the Victory, with the Euryalus frigate, on the morning of the 15th of September 1805, to take the command of the British Fleet cruizing before Cadiz. On the 18th he appeared off Plymouth; where he was joined by his Majesty's ships Thunderer and Ajax, with which he proceeded for his destined station. On the 20th he communicated by private signal with the squadron under the command of Rear-Admiral STIRLING, which passed within a few miles of the Victory; and the same day at noon, spoke his Majesty's ship Le Decade, having on board Rear-Admiral Sir RICHARD BICKERTON, who, was on his return to England for the recovery of his health.

Some bad weather and adverse winds were experienced by the Victory in crossing the Bay of Biscay, and on the 27th Cape St. Vincent was seen. Lord NELSON had dispatched the Euryalus ahead on the preceding day, to acquaint Admiral COLLINGWOOD with his approach; and to direct that no salute should take place, nor any public compliments be paid to his flag, on his assuming the command, as he wished the Enemy to be kept ignorant of a reinforcement being received by the British Fleet. In the evening of the 28th, the Victory joined the Fleet; now consisting of twenty-seven ships of the line, including the Victory, Ajax, and Thunderer: the city of Cadiz was seen distant about fifteen miles, with the Combined Fleets at anchor; and Admiral LOUIS, with five or six ships under his command, close in shore, watching the motions of the Enemy.

On the 29th, prompt and decisive measures were adopted to prevent the Enemy from receiving any supplies of provisions by sea, which His LORDSHIP was informed they were very much distressed for: cruizers were stationed off the Capes St. Vincent, St. Mary's, and Trafalgar; and the frigates Euryalus and Hydra were ordered to keep off the entrance of Cadiz. His LORDSHIP now retired with the Fleet to the vicinity of Cape St. Mary's, about fifty or sixty miles westward of Cadiz; keeping up a constant communication with the frigates in shore, by means of three or four ships of the line placed at convenient intervals for distinguishing the signals of each other. This distance from, the Enemy's port was preserved by His LORDSHIP, to prevent them from being speedily acquainted with the force of the Fleet under his command; and that he might avoid the necessity of bearing up in bad weather, and running with the Fleet through the Straits of Gibraltar when the westerly gales prevailed: as the inconvenience of being forced into the Mediterranean, had been felt by former Commanders in Chief; and would now have afforded a favourable opportunity to the Enemy of effecting their escape from Cadiz, or at all events have rendered their obtaining supplies less difficult.

On the 1st of October Admiral LOUIS joined the Fleet, with a part of his squadron (the Canopus, Spencer, and Tigre), from before Cadiz; and departed the next day with those ships, the Queen, and the Zealous, for Gibraltar, to procure a supply of provisions, stores, and water, which they were much in want of. On the 4th he rejoined with his squadron; having received intelligence from the Euryalus by telegraph, that the French ships in Cadiz were embarking their troops, and preparing to sail. Lord NELSON however conceived this to be merely intended as a stratagem, to draw him nearer to Cadiz, for the purpose of obtaining a knowledge of his force; and therefore directed Admiral LOUIS to proceed in the execution of the orders before delivered to him.

Between the 7th and the 13th, His LORDSHIP was reinforced by the Royal Sovereign, Belleisle, Defiance, Agamemnon, and Africa, from England, and the Leviathan from Gibraltar. The Agamemnon, Sir EDWARD BERRY, joined on the 13th; with intelligence that she had been chased on the coast of Portugal a few days before by an Enemy's squadron, consisting of six sail of the line.

On the 13th in the evening, Sir ROBERT CALDER, in his Majesty's ship the Prince of Wales, parted company with the Fleet, on his return to England. His departure Lord NELSON had some days before evinced an anxious wish to procrastinate, and was heard that very day to declare his firm belief that the Combined Fleets would be at sea in the course of ten days or a fortnight.

On the 18th the Donegal, Captain MALCOLM, left the Fleet for Gibraltar. On the 19th his Majesty's ships the Colossus, Mars, Defence, and Agamemnon, formed the cordon of communication with the frigates in shore: the Fleet was lying to. About half past nine in the morning, the Mars, being one of the ships nearest to the Fleet, repeated the signal from the ships further in shore, that "the Enemy were coming out of port." Lord NELSON immediately ordered the general signal to be made, with two guns, for a chace in the south-east quarter. The wind was now very light; and the breezes partial, mostly from the south-south-west. The Fleet made all possible sail; and about two o'clock the Colossus and Mars repeated signals from the ships in shore, communicating the welcome intelligence of "the Enemy being at sea." This cheered the minds of all on board, with the prospect of realizing those hopes of meeting the Enemy which had been so long and so sanguinely entertained. It was well known to His LORDSHIP, that all the Enemy's ships had the iron hoops on their masts painted black; whereas the British ships, with the exception of the Belleisle and Polyphemus, had theirs painted yellow: and as he considered that this would serve for a very good mark of distinction in the heat of battle, he made known this circumstance to the Fleet, and ordered the Belleisle and Polyphemus to paint their hoops yellow; but the evening being far advanced when the signal was made to them for this purpose, His LORDSHIP, fearing that it might not be distinctly understood, sent the Entreprenante cutter to them to communicate the order.

During the night the Fleet continued steering to the south-east under all sail, in expectation of seeing the Enemy; and at day-break on the 20th found itself in the entrance of the Straits of Gibraltar, but nothing of the Enemy to be discovered. The Fleet now wore, and made sail to the north-west; and at seven in the morning the Phoebe was seen making signals for "the Enemy bearing north." At eight o'clock the Victory hove to; and Admiral COLLINGWOOD, with the Captains of the Mars, Colossus, and Defence, came on board, to receive instructions from His LORDSHIP; at eleven minutes past nine they returned to their respective ships, and the Fleet made sail again to the northward.

In the afternoon the wind increased, and blew fresh from the south-west; which excited much apprehension on board the Victory, lest the Enemy might be forced to return to port....