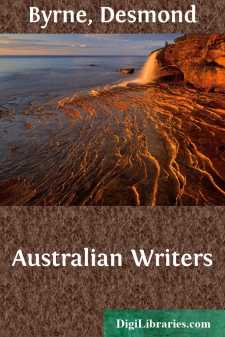 Any survey of the work done by Australian authors suggests a question as to what length of time ought to be allowed for the development of distinctive national characteristics in the literature of a young country self-governing to the extent of being a republic in all but name, isolated in position, highly civilised, enjoying all the modern luxuries available to the English-speaking race in older lands, and with a population fully two-thirds native. The common saying that a country cannot be expected to produce literature during the earlier state of its growth is too vague a generalisation. There are circumstances by which its application may be modified. It certainly does not apply with equal force to [p 2] a country whose early difficulties included race conflicts, war with an external power and political labours of great magnitude, and to another whose commercial and social development, carried on under more modern conditions by a people almost entirely homogeneous, has been facile, unbroken and extraordinarily rapid.

Nor can paucity of literary product, where it exists, be satisfactorily explained by the unrest that continues in a new land long after it has attained material prosperity and the higher refinements of life. The Americans are a type of an extremely restless people. They have been so throughout the greater part of their history, and the characteristic is now more marked than ever. It is a fixed condition of their national being, an expression of the cumulative ambition that is the source of their varied progress. Yet from time to time men have arisen among them who not only have given intimate views of a new civilisation, but have added something to the permanent stock of what Matthew Arnold used to call ‘the best that is known [p 3] and thought in the world.’ Even when the independent nationhood of the United States was still but an aspiration, Benjamin Franklin had familiarised Europe with much that has since been recognised as inherent in the modes of thought and manners of the Western race.

The bulk of the literature of America is, of course, still small in proportion to the culture and intellectual energy of the country; but it has been and is sufficient to interpret in a more or less distinctive way all the leading phases in the evolution of the national thought and sentiment. The subtle influence of the deeply-grounded religious feeling which, implanted by the Puritan pioneers, has survived generations of intense absorption in material progress and the distractions that modern life offers to the possessors of newly-acquired wealth; the pride of the people in their independence, and their natural tendency to overrate it in comparison; with the conditions of other countries; the contrasts furnished by a society fond of reproducing European habits, yet retaining a [p 4] simplicity and freshness of its own: these and other features in the progress of the United States for over a century may be found expressed in its literature from the native standpoint, and not merely from that of the intelligent outside observer.

An American writer in discussing, a few years ago, the quality of the literature produced before the War of Secession, when wealth and leisure were abundant among the planters and in the principal New England towns, observed that ‘there would seem to be something in the relation of a colony to the mother-country which dooms the thought and art of the former to a hopeless provincialism.’ If a comment so largely fanciful could be made respecting Australasia and Canada, it would practically mean—at all events from the American point of view—that as long as they remain dependencies of Great Britain, and therefore lack the stimulus of an active patriotism, so long will much of whatever is individual in their social development and national aspirations be without expression. In the case of the Australasian [p 5] colonies it would further mean (apart from any consideration of their future independence) that a people far removed from other communities of the same race and already giving promise of being the greatest power south of the equator, must continue for an indefinite period to be wholly sustained and swayed in matters of thought and art by a country over twelve thousand miles distant that happens for the present to offer the most convenient markets in which to buy and sell....