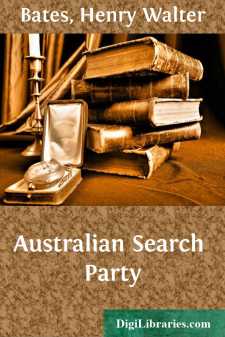 IN a former narrative, published in the preceding volume of the ILLUSTRATED TRAVELS, I gave an account of a terrible cyclone which visited the north-eastern coast of Queensland in the autumn of 1866, nearly destroying the small settlements of Cardwell and Townsville, and doing an infinity of damage by uprooting heavy timber, blocking up the bush roads, etc. Amongst other calamities attendant on this visitation was the loss of a small coasting schooner, named the 'Eva', bound from Cleveland to Rockingham Bay, with cargo and passengers. Only those who have visited Australia can picture to themselves the full horror of a captivity amongst the degraded blacks with whom this unexplored district abounds; and a report of white men having been seen amongst the wild tribes in the neighbourhood of the Herbert River induced the inhabitants of Cardwell to institute a search party to rescue the crew of the unhappy schooner, should they still be alive; or to gain some certain clue to their fate, should they have perished.

In my former narrative I described our exploration of the Herbert River, lying at the south end of Rockingham Channel, with its fruitless issue; and I now take up the thread of my story from that point, thinking it can hardly fail to be of interest to the reader, not only as regards the wild nature of the country traversed, but also as showing the anxiety manifested by the inhabitants of these remote districts to clear up the fate of their unhappy brethren. I may also here mention, for the information of such of my readers as may not have read the preceding portions of the narrative, that Cardwell is the name of a small township situated on the shores of Rockingham Bay; and that Townsville is a settlement some hundred miles further south, known also as Cleveland Bay.

HOW WE EXPLORED GOULD AND GARDEN ISLANDS.

We were all much pleased at a piece of intelligence brought up by the 'Daylight', to the effect that a party of volunteers had been assembled at Cleveland Bay, and intended coming up in a small steamer to the south end of Hinchinbrook, to assist in the search for the missing crew. As it would be of the utmost importance that both parties should co-operate, I sent my boat down to the mouth of the channel, with a note to the leader of the expedition announcing our intention of landing on the north end of the island and working towards the centre; and requesting them to scour their end, and then push northward, when we should most probably meet in the middle of the island. The boat had orders to wait at the bar until the arrival of the steamer, and then to return with all speed. In the meanwhile, the 'Daylight' was discharging her cargo, and we were making preparations for what we well knew would prove a most arduous undertaking; the sequel will show that we did not overrate the difficulties before us.

At the risk of being tedious, I must explain to the reader some of the peculiarities of Hinchinbrook Island. Its length is a little short of forty miles, and its shape a rude triangle, the apex of which is at the south, and the north side forming the southern portion of Rockingham Bay. Now this north side is by no means straight, but is curved out into two or three bays of considerable extent, and in one of them stand two islands named Gould and Garden Islands. The latter of these was our favourite resort for picnics, for the dense foliage afforded good shade, and, when the tide was low, we were enabled to gather most delicious oysters from some detached rocks. Gould Island is considerably larger; but, rising in a pyramid from the sea, and being covered with loose boulders, it was most tedious climbing. From the township we could, with our glasses, see canoes constantly passing and repassing between these two islands; and as the 'Daylight' had a particularly heavy cargo this trip, and would not be clear for the next two days, we made up our minds to search the islands, and drive the blacks on to Hinchinbrook, so that one of our parties must stumble across them when we swept it....