Austin and His Friends 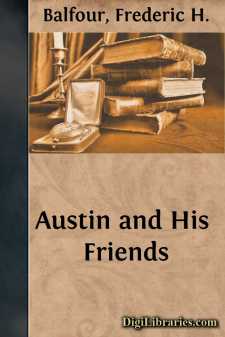 Austin and His Friends Chapter the First

It was rather a beautiful old house—the house where Austin lived. That is, it was old-fashioned, low-browed, solid, and built of that peculiar sort of red brick which turns a rich rose-colour with age; and this warm rosy tint was set off to advantage by the thick mantle of dark green ivy in which it was partly encased, and by the row of tall white and purple irises which ran along the whole length of the sunniest side of the building. There was an ancient sun-dial just above the door, and all the windows were made of small, square panes—not a foot of plate-glass was there about the place; and if the rooms were nor particularly large or stately, they had that comfortable and settled look which tells of undisturbed occupancy by the same inmates for many years. But the principal charm of the place was the garden in which the house stood. In this case the frame was really more beautiful than the picture. On one side, the grounds were laid out in very formal style, with straight walks, clipped box hedges, an old stone fountain, and a perfect bowling-green of a lawn; while at right angles to this there was a plot of land in which all regularity was set at naught, and sweet-peas, tulips, hollyhocks, dahlias, gillyflowers, wall-flowers, sun-flowers, and a dozen others equally sweet and friendly shared the soil with gooseberry bushes and thriving apple-trees. Taking it all in all, it was a lovable and most reposeful home, and Austin, who had lived there ever since he could remember, was quite unable to imagine any lot in life that could be compared to his.

Now this was curious, for Austin was a hopeless cripple. Up to the age of sixteen, he had been the most active, restless, healthy boy in all the countryside. He used to spend his days in boating, bicycling, climbing hills, and wandering at large through the woods and leafy lanes which stretched far and wide in all directions of the compass. One of his chief diversions had been sheep-chasing; nothing delighted him more than to start a whole flock of the astonished creatures careering madly round some broad green meadow, their fat woolly backs wobbling and jolting along in a compact mass of mild perplexity at this sudden interruption of their never-ending meal, while Austin scampered at their tails, as much excited with the sport as Don Quixote himself when he dispersed the legions of Alifanfaron. Let hare-coursers, otter-hunters, and pigeon-torturers blame him if they choose; the exercise probably did the sheep a vast amount of good, and Austin fully believed that they enjoyed it quite as much as he did. Then suddenly a great calamity befell him. A weakness made itself apparent in his right knee, accompanied by considerable pain. The family doctor looked anxious and puzzled; a great surgeon was called in, and the two shook their heads together in very portentous style. It was a case of caries, they said, and Austin mustn't hunt sheep any more. Soon he had to lie upon the sofa for several hours a day, and what made Aunt Charlotte more anxious than anything else was that he didn't seem to mind lying on the sofa, as he would have done if he had felt strong and well; on the contrary, he grew thin and listless, and instead of always jumping up and trying to evade the doctor's orders, appeared quite content to lie there, quiet and resigned, from one week's end to another....