Aunt Amy or, How Minnie Brown learned to be a Sunbeam 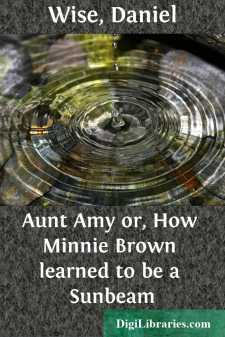 As Minnie Brown was walking one day along the principal street of Rosedale, she met Arthur Ellerslie, who said to her,—

“Minnie, there is a letter in the post office for you.”

“A letter for me!” exclaimed the little girl, her bright eyes flashing at the bare idea of a letter being sent to her.

“Yes, there is a letter for you, Minnie. I saw it myself in the post office window,” replied Arthur.

“O, I’m so glad! It must be from my aunt Amy. I will run and get it;” and away she skipped to the post office, with a step as light as a fawn’s, and a heart as cheerful as merry music. It was very pleasant to see her standing before the little window of the post office, her face wreathed in smiles, and her hand stretched out, as she said,—

“Yes, Miss Minnie, you shall have your letter,” replied the good-natured man who kept the office, and who seemed, by his looks, to share the child’s delight, as he handed her the letter.

“Thank you, sir,” said Minnie; and then, with swift feet, she ran into the street, and almost flew along the sidewalk. When she reached home, she was nearly out of breath. Finding her mother in the parlor, she exclaimed,—

“Yes, mother, and she says she is coming to see us next week. O, I am so glad—ain’t you, mother?”

“Yes, Minnie, I shall be very glad to see my sister.”

“She wants me to write to her directly, and tell her if it will be convenient for you to have her come. What shall I write, mother?”

“You may say we shall be very happy to see her at that time.”

“Shall I answer the letter at once, mother?”

“You may, Minnie. Though, perhaps, you had better let me read it first.”

Minnie blushed a little, as she handed the letter to her mother. She had been too hurried, and her mother’s request sounded like a kind rebuke. Minnie’s gentle spirit felt it, and she grew more quiet, as she waited for her mother to read the letter.

“There, my child, that will do,” said Mrs. Brown, giving her the letter again. “Now you may go to your chamber and write as pretty a reply as you can to your aunt, inviting her to come, as she proposes.”

Minnie carried the letter to her room, where she had some nice writing materials of her own. She spread a clean sheet of white paper on the table, and began her letter. When she wanted a thought, she stood the pen in the ink-stand while she read over her aunt’s letter anew. When an idea came, she wrote it down, and so kept on until she finished her answer.

And a nice little letter it was, written in neat style, without a single blot. Minnie took it to her mother, who said it would please aunt Amy very much. The thought of adding to her aunt’s pleasure increased Minnie’s joy. So, after folding the letter very smoothly, she directed it in large, bold writing to her aunt, and, with her mother’s consent, took it to the post office.

When she had placed her letter in the box, Minnie thought she should like to tell Arthur Ellerslie that her aunt Amy was coming to Rosedale. So she walked round by Arthur’s house....