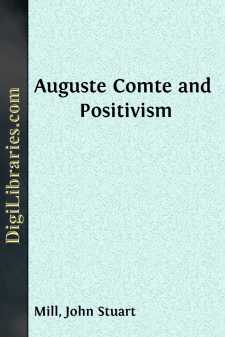 For some time much has been said, in England and on the Continent, concerning "Positivism" and "the Positive Philosophy." Those phrases, which during the life of the eminent thinker who introduced them had made their way into no writings or discussions but those of his very few direct disciples, have emerged from the depths and manifested themselves on the surface of the philosophy of the age. It is not very widely known what they represent, but it is understood that they represent something. They are symbols of a recognised mode of thought, and one of sufficient importance to induce almost all who now discuss the great problems of philosophy, or survey from any elevated point of view the opinions of the age, to take what is termed the Positivist view of things into serious consideration, and define their own position, more or less friendly or hostile, in regard to it. Indeed, though the mode of thought expressed by the terms Positive and Positivism is widely spread, the words themselves are, as usual, better known through the enemies of that mode of thinking than through its friends; and more than one thinker who never called himself or his opinions by those appellations, and carefully guarded himself against being confounded with those who did, finds himself, sometimes to his displeasure, though generally by a tolerably correct instinct, classed with Positivists, and assailed as a Positivist. This change in the bearings of philosophic opinion commenced in England earlier than in France, where a philosophy of a contrary kind had been more widely cultivated, and had taken a firmer hold on the speculative minds of a generation formed by Royer-Collard, Cousin, Jouffroy, and their compeers. The great treatise of M. Comte was scarcely mentioned in French literature or criticism, when it was already working powerfully on the minds of many British students and thinkers. But, agreeably to the usual course of things in France, the new tendency, when it set in, set in more strongly. Those who call themselves Positivists are indeed not numerous; but all French writers who adhere to the common philosophy, now feel it necessary to begin by fortifying their position against "the Positivist school." And the mode of thinking thus designated is already manifesting its importance by one of the most unequivocal signs, the appearance of thinkers who attempt a compromise or juste milieu between it and its opposite. The acute critic and metaphysician M. Taine, and the distinguished chemist M. Berthelot, are the authors of the two most conspicuous of these attempts.

The time, therefore, seems to have come, when every philosophic thinker not only ought to form, but may usefully express, a judgment respecting this intellectual movement; endeavouring to understand what it is, whether it is essentially a wholesome movement, and if so, what is to be accepted and what rejected of the direction given to it by its most important movers. There cannot be a more appropriate mode of discussing these points than in the form of a critical examination of the philosophy of Auguste Comte; for which the appearance of a new edition of his fundamental treatise, with a preface by the most eminent, in every point of view, of his professed disciples, M....