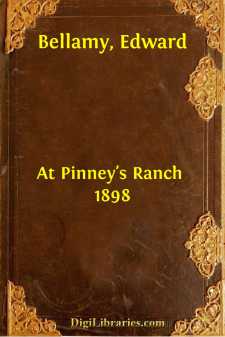 John Lansing first met Mary Hollister at the house of his friend Pinney, whose wife was her sister. She had soft gray eyes, a pretty color in her cheeks, rosy lips, and a charming figure. In the course of the evening somebody suggested mind-reading as a pastime, and Lansing, who had some powers, or supposed powers, in that direction, although he laughed at them himself, experimented in turn with the ladies. He failed with nearly every subject until it came Mary Hollister's turn. As she placed her soft palm in his, closed her eyes, and gave herself up to his influence, he knew that he should succeed with her, and so he did. She proved a remarkably sympathetic subject, and Lansing was himself surprised, and the spectators fairly thrilled, by the feats he was able to perform by her aid. After that evening he met her often, and there was more equally remarkable mind-reading; and then mind-reading was dropped for heart-reading, and the old, old story they read in each other's hearts had more fascination for them than the new science. Having once discovered that their hearts beat in unison, they took no more interest in the relation of their minds.

The action proper of this story begins four years after their marriage, with a very shocking event,—nothing less than the murder of Austin Flint, who was found dead one morning in the house in which he lived alone. Lansing had no hand in the deed, but he might almost as well have had; for, while absolutely guiltless, he was caught in one of those nets of circumstance which no foresight can avoid, whereby innocent men are sometimes snared helplessly, and delivered over to a horrid death. There had been a misunderstanding between him and the dead man, and only a couple of days before the murder, they had exchanged blows on the street. When Flint was found dead, in the lack of any other clue, people thought of Lansing. He realized that this was so, and remained silent as to a fact which otherwise he would have testified to at the inquest, but which he feared might now imperil him. He had been at Austin Flint's house the night of the murder, and might have committed it, so far as opportunity was concerned. In reality, the motive of his visit was anything but murderous. Deeply chagrined by the scandal of the fight, he had gone to Flint to apologize, and to make up their quarrel. But he knew very well that nobody would believe that this was his true object in seeking his enemy secretly by night, while the admission of the visit would complete a circumstantial evidence against him stronger than had often hanged men. He believed that no one but the dead man knew of the call, and that it would never be found out. He had not told his wife of it at the time, and still less afterward, on account of the anxiety she would feel at his position.

Two weeks passed, and he was beginning to breathe freely in the assurance of safety, when, like a thunderbolt from a cloud that seems to have passed over, the catastrophe came. A friend met him on the street one day, and warned him to escape while he could. It appeared that he had been seen to enter Flint's house that night. His concealment of the fact had been accepted as corroborating evidence of his guilt, and the police, who had shadowed him from the first, might arrest him at any moment. The conviction that he was guilty, which the friend who told him this evidently had, was a terrible comment on the desperateness of his position. He walked home as in a dream. His wife had gone out to a neighbor's. His little boy came to him, and clambered on his knee. "Papa, what makes your face so wet?" he asked, for there were great drops on his forehead. Then his wife came in, her face white, her eyes full of horror. "Oh, John!" she exclaimed. "They say you were at Mr. Flint's that night, and they are going to arrest you. Oh, John, what does it mean? Why don't you speak? I shall go mad, if you do not speak. You were not there! Tell me that you were not there!" The ghastly face he raised to hers might well have seemed to confess everything.

At least she seemed to take it so, and in a fit of hysterical weeping sank to the floor, and buried her face in her hands upon a chair....