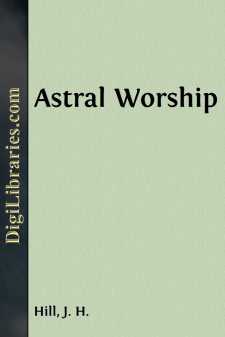 In an article, entitled "Then and Now," published in the December number, 1890, of "The Arena," its author, a distinguished Unitarian D.D. of Boston, Mass., says. "Astronomy has shattered the fallacies of Astrology; and people have found out that the stars are minding their own business instead of meddling with theirs." Now, while it is true that modern Astronomy has superseded the ancient system, and people have ceased to believe that the stars are intervening in mundane affairs, nothing could be further from the truth than the assertion that "Astronomy has shattered the fallacies of Astrology;" and those of our readers who will accord to this work an unprejudiced perusal can hardly fail to be convinced that a large majority of the people of Christendom are dominated as much by these fallacies as were our Pagan ancestry—the only difference being a change of name. The dogmatic element of religion, which was anciently designated as Astrology, is now known as Theology.

All the evidences bearing upon the subject indicate that the founders of the primary form of religion were a sect of philosophers, known as Magi, or wise men, of the Aryan race of Central Asia, who, having lived ages before any conceptions of the supernatural had obtained in the world, and speculating relative to the "beginnings of things," were necessarily confined to the contemplation and study of nature, the elements of which they believed to be self-existent and endless in duration; but, being wholly without knowledge of her inherent forces, they explained her manifold processes by conceiving the idea that she was animated by a great and inherent soul or spirit, emanations from which impressed all her parts with life and motion. Thus, endowing man, and other animals, with souls emanating alike from the imaginary great soul of nature, they believed, and taught, that immediately after death all souls were absorbed into their source, where, as "the dewdrop slips into the shining sea," all personal identity was forever lost. Hence we see that although recognizing the soul as immortal, considering it, not as an entity existing independent of matter, but as the spirit of matter itself, the primary religion was the exponent of the purest form of Materialism.

Being the Astronomers of their day, and mistaking the apparent for the real, the ancient Magi constructed that erroneous system of nature known as the Geocentric, and, in conformity thereto, composed a collection of Astronomical Allegories, in which the emanations from the imaginary great soul of nature, by which they believed all materialities we're impressed with life and motion, were personified and made to play their respective parts. Basing the religion they instituted upon their system of Allegorical Astronomy, and making its personifications the objects of worship, they thus originated the anthropomorphic or man-like Gods, and, claiming to have composed them under the inspiration of these self same divinities, they designated them as sacred records, or Scriptures, and taught the ignorant masses that they were literal histories, and their personifications real personages, who, having once lived upon earth, and; for the good of mankind, performed the wondrous works imputed to them, were then in heaven whence they came....