Astoria, or, anecdotes of an enterprise beyond the Rocky Mountains 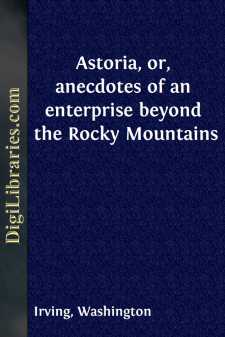 IN THE COURSE of occasional visits to Canada many years since, I became intimately acquainted with some of the principal partners of the great Northwest Fur Company, who at that time lived in genial style at Montreal, and kept almost open house for the stranger. At their hospitable boards I occasionally met with partners, and clerks, and hardy fur traders from the interior posts; men who had passed years remote from civilized society, among distant and savage tribes, and who had wonders to recount of their wide and wild peregrinations, their hunting exploits, and their perilous adventures and hair-breadth escapes among the Indians. I was at an age when imagination lends its coloring to everything, and the stories of these Sinbads of the wilderness made the life of a trapper and fur trader perfect romance to me. I even meditated at one time a visit to the remote posts of the company in the boats which annually ascended the lakes and rivers, being thereto invited by one of the partners; and I have ever since regretted that I was prevented by circumstances from carrying my intention into effect. From those early impressions, the grand enterprise of the great fur companies, and the hazardous errantry of their associates in the wild parts of our vast continent, have always been themes of charmed interest to me; and I have felt anxious to get at the details of their adventurous expeditions among the savage tribes that peopled the depths of the wilderness.

About two years ago, not long after my return from a tour upon the prairies of the far West, I had a conversation with my friend, Mr. John Jacob Astor, relative to that portion of our country, and to the adventurous traders to Santa Fe and the Columbia. This led him to advert to a great enterprise set on foot and conducted by him, between twenty and thirty years since, having for its object to carry the fur trade across the Rocky Mountains, and to sweep the shores of the Pacific.

Finding that I took an interest in the subject, he expressed a regret that the true nature and extent of his enterprise and its national character and importance had never been understood, and a wish that I would undertake to give an account of it. The suggestion struck upon the chord of early associations already vibrating in my mind. It occurred to me that a work of this kind might comprise a variety of those curious details, so interesting to me, illustrative of the fur trade; of its remote and adventurous enterprises, and of the various people, and tribes, and castes, and characters, civilized and savage, affected by its operations. The journals, and letters, also, of the adventurers by sea and land employed by Mr. Astor in his comprehensive project, might throw light upon portions of our country quite out of the track of ordinary travel, and as yet but little known. I therefore felt disposed to undertake the task, provided documents of sufficient extent and minuteness could be furnished to me. All the papers relative to the enterprise were accordingly submitted to my inspection....