Asiatic Breezes Students on The Wing 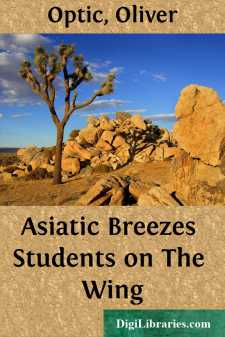 "ASIATIC BREEZES" is the fourth volume of the second series of the "All-Over-the-World Library." Starting out from Alexandria, Egypt, after the adventures and explorations of the Guardian-Mother party in that interesting country, which included an excursion up the Nile to the First Cataract, the steamer sails out upon the Mediterranean, closely followed by her little consort. The enemy who had made a portion of the voyage exceedingly disagreeable to the watchful commander has been thwarted in all his schemes, and the threatened danger kept at a distance, even while those who are most deeply interested are unconscious of its existence.

But the old enemy immediately appears on the coast, as was expected, and an attempt is made to carry out a plan to escape from further annoyance. The little steamer sails for the island of Cyprus, as arranged beforehand, and reaches her destination, though she encounters a smart gale on the voyage, through which the young navigators carry their lively little craft. Plans do not always work as they have been arranged; and by an accident the young people are left to fight their own battle, as has happened several times before in the history of the cruise.

A considerable portion of the volume is taken up with the record of some very stirring events in a certain bay of the island of Cyprus, where the little steamer had made a harbor after the gale, and where the Guardian-Mother had failed to join her, as agreed upon. The story relates the manner in which the young captain, actively seconded by his shipmates, extricates his little craft from a very perilous situation, though it involves a disaster to the piratical enemy and his steamer. The conduct of the boy-commander brings up several questions of interest, upon which everybody has a right to his own opinion.

The steamer and her consort pass through the Suez Canal, which is minutely described, both in its construction and operation. Some of those on board of the steamer are interested in Scripture history, including the commander; and the residence of the Israelites in the "Land of Goshen," as well as their pilgrimage into Asia, pursued by "Pharaoh and his host," are considered at some length. Some of the different views in regard to the passage of the Red Sea are given, though he who presents them clings to the narrative as he read it from the Bible in his childhood.

Though the party for reasons given do not go to Mount Sinai, the peninsula to which it now gives its name is not neglected. Mount Serbal, and what is generally regarded as the Holy Mountain, are seen from the deck of the steamer, though some claim that the former is the scene of the delivery of the tablets of the Law to Moses. The captain of the steamer does not regard himself as a mere shipmaster; for in recommending the voyage for the young millionaire, he makes a great deal of its educational features, not alone for its opportunities for sight-seeing, but for study and receiving instruction. As earnest in carrying out his idea in the latter as well as the former, he has made a lecture-room of the deck of the vessel.

The physical geography of the regions passed through is considered, as well as the history; and as the ship is in the vicinity of the kingdoms of the ancient world, the professor has something to say to his audience about Assyria, Babylonia, Arabia, the Caliphate, and gives an epitome of the life of Mohammed, and the rise and progress of Islamism.

In the last chapters the story, which has been extended through several volumes, appears to be brought to a conclusion in a manner that may astonish the reader. However that may be, the termination points to an enlarged field of operations in the future for the party as they visit the vast empires where blow the Asiatic breezes....