As a Matter of Course 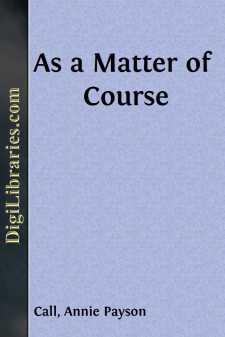 IN climbing a mountain, if we know the path and take it as a matter of course, we are free to enjoy the beauties of the surrounding country. If in the same journey we set a stone in the way and recognize our ability to step over it, we do so at once, and save ourselves from tripping or from useless waste of time and thought as to how we might best go round it.

There are stones upon stones in every-day life which might be stepped over with perfect ease, but which, curiously enough, are considered from all sides and then tripped upon; and the result is a stubbing of the moral toes, and a consequent irritation of the nervous system. Or, if semi-occasionally one of these stones is stepped over as a matter of course, the danger is that attention is immediately called to the action by admiring friends, or by the person himself, in a way so to tickle the nervous system that it amounts to an irritation, and causes him to trip over the next stone, and finally tumble on his nose. Then, if he is not wise enough to pick himself up and walk on with the renewed ability of stepping over future stones, he remains on his nose far longer than is either necessary or advisable.

These various stones in the way do more towards keeping a nervous system in a chronic state of irritation than is imagined. They are what might perhaps be called the outside elements of life. These once normally faced, cease to exist as impediments, dwindle away, and finally disappear altogether.

Thus we are enabled to get nearer the kernel, and have a growing realization of life itself.

Civilization may give a man new freedom, a freedom beyond any power of description or conception, except to those who achieve it, or it may so bind him body and soul that in moments when he recognizes his nervous contractions he would willingly sell his hope of immortality to be a wild horse or tiger for the rest of his days.

These stones in the way are the result of a perversion of civilization, and the cause of much contraction and unnecessary suffering.

There is the physical stone. If the health of the body were attended to as a matter of course, as its cleanliness is attended to by those of us who are more civilized, how much easier life might be! Indeed, the various trippings on, and endeavors to encircle, this physical stone, raise many phantom stones, and the severity of the fall is just as great when one trips over a stone that is not there. Don Quixote was quite exhausted when he had been fighting the windmills. One recognizes over and over the truth spoken by the little girl who, when reprimanded by her father for being fretful, said: "It isn't me, papa, it's that banana."

There is also the over-serious stone; and this, so far from being stepped over or any effort made to encircle it, is often raised to the undue dignity of a throne, and not rested upon. It seems to produce an inability for any sort of recreation, and a scorn of the necessity or the pleasure of being amused. Every one will admit that recreation is one swing of life's pendulum; and in proportion to the swing in that direction will be the strength of the swing in the other direction, and vice versa....