Artist and Public And Other Essays On Art Subjects 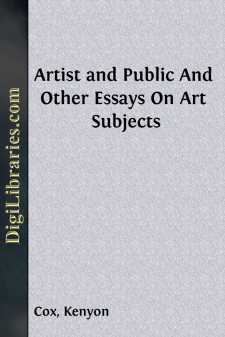 In the history of art, as in the history of politics and in the history of economics, our modern epoch is marked off from all preceding epochs by one great event, the French Revolution. Fragonard, who survived that Revolution to lose himself in a new and strange world, is the last at the old masters; David, some sixteen years his junior, is the first of the moderns. Now if we look for the most fundamental distinction between our modern art and the art of past times, I believe we shall find it to be this: the art of the past was produced for a public that wanted it and understood it, by artists who understood and sympathized with their public; the art of our time has been, for the most part, produced for a public that did not want it and misunderstood it, by artists who disliked and despised the public for which they worked. When artist and public were united, art was homogeneous and continuous. Since the divorce of artist and public art has been chaotic and convulsive.

That this divorce between the artist and his public—this dislocation of the right and natural relations between them—has taken place is certain. The causes of it are many and deep-lying in our modern civilization, and I can point out only a few of the more obvious ones.

The first of these is the emergence of a new public. The art of past ages had been distinctively an aristocratic art, created for kings and princes, for the free citizens of slave-holding republics, for the spiritual and intellectual aristocracy of the church, or for a luxurious and frivolous nobility. As the aim of the Revolution was the destruction of aristocratic privilege, it is not surprising that a revolutionary like David should have felt it necessary to destroy the traditions of an art created for the aristocracy. In his own art of painting he succeeded so thoroughly that the painters of the next generation found themselves with no traditions at all. They had not only to work for a public of enriched bourgeois or proletarians who had never cared for art, but they had to create over again the art with which they endeavored to interest this public. How could they succeed? The rift between artist and public had begun, and it has been widening ever since.

If the people had had little to do with the major arts of painting and sculpture, there had yet been, all through the Middle Ages and the Renaissance, a truly popular art—an art of furniture making, of wood-carving, of forging, of pottery. Every craftsman was an artist in his degree, and every artist was but a craftsman of a superior sort. Our machine-making, industrial civilization, intent upon material progress and the satisfaction of material wants, has destroyed this popular art; and at the same time that the artist lost his patronage from above he lost his support from below. He has become a superior person, a sort of demi-gentleman, but he has no longer a splendid nobility to employ him or a world of artist artisans to surround him and understand him....