Art in England Notes and Studies 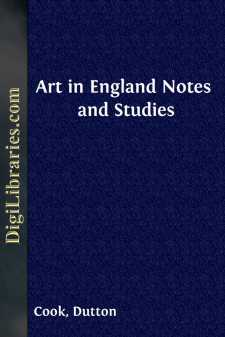 harles the First appears to have been the first English Sovereign who regarded art, not merely as an aid to the splendour of the throne, but for its own sake. As Walpole says, 'Queen Elizabeth was avaricious with pomp, James the First lavish with meanness.' To neither had the position of the painter been a matter of the slightest concern. But from Charles the First dates truly the dawn of a love of art in England, the proper valuing of the artist-mind, and the first introduction into the country of the greatest works of the continental masters.

At the present day a complaint is constantly arising, that artists are found to be deficient in general education, while what may be called for distinction's sake the educated classes are singularly wanting in artistic knowledge. The Universities do not teach art; the Art-schools do not teach anything else. As a result, speaking generally, the painters are without mental culture, the patrons are without art-acquirements. (This supposes the patrons to be of the upper classes; but of course at the present time a large share of art-patronage comes from the rich middle or manufacturing classes, whose uninformed tastes are even less likely to tend to the due appraisement and elevation of art.) Mr. Ruskin, giving evidence before the commissioners inquiring into the position of the Royal Academy (1863), says, 'The want of education on the part of the upper classes in art, has been very much at the bottom of the abuses which have crept into all systems of education connected with it. If the upper classes could only be interested in it by being led into it when young, a great improvement might be looked for;' and the witness goes on to urge the expediency of appointing professors of art at the Universities. Upon the question of infusing a lay-element into the Royal Academy by the addition of non-professional academicians, Mr. Ruskin takes occasion to observe:—'I think if you educate our upper classes to take more interest in art, which implies of course to know something about it, they might be most efficient members of the Academy; but if you leave them, as you leave them now, to the education which they get at Oxford and Cambridge, and give them the sort of scorn which all the teaching there tends to give of art and artists, the less they have to do with an Academy of Art the better.'

It is somewhat curious after this to consider an attempt made by King Charles the First, in the eleventh year of his reign, to supply these admitted deficiencies of University instruction: to found an Academy in which general and fine-art education should be combined.

A committee, consisting of the Duke of Buckingham and others, had been appointed in the House of Lords for taking into consideration the state of the public schools, and their method of instruction. What progress was made by this committee is not known. One result of its labours, however, was probably the establishment of the Musæum Minervæ, under letters-patent from the king, at a house which Sir Francis Kynaston had purchased, in Covent Garden, and furnished as an Academy. This was appropriated for ever as a college for the education of nobles and gentlemen, to be governed by a regent and professors, chosen by 'balloting-box,' who were made a body corporate, permitted to use a common seal, and to possess goods and lands in mortmain. Kynaston, who styled himself Corporis Armiger, and who had printed in 1635 a translation into Latin verse of Chaucer's Troilus and Cressida, was nominated the first regent of the Academy, and published in 1636 its constitution and rules, addressed 'to the noble and generous well-wishers to vertuous actions and learning.' The Academy—'justified and approved by the wisdom of the King's most sacred Majesty and many of the lords of his Majesty's most honourable privy council,'—its constitution and discipline being ratified under the hands and seals of the Right Honourable the Lord Keeper of the Great Seal of England and the two Lord Chief Justices—professed to be founded 'according to the laudable customs of other nations,' and for 'the bringing of virtue into action and the theory of liberal arts into more frequent practice.' Its aims were directed to the end that England might be as well furnished for the virtuous education and discipline of her own natives as any other nation of Europe; it being 'sufficiently known that the subjects of his Majesty's dominions have naturally as noble minds and as able bodies as any nation of the earth, and therefore deserve all accommodation for the advancing of them, either in speculation or action.' It was considered that a peculiar institution was required for teaching those 'most useful accomplishments of a gentleman'—the sciences of navigation, riding, fortification, architecture, painting, etc., which, if taught, were yet not practised in the universities or courts of law....