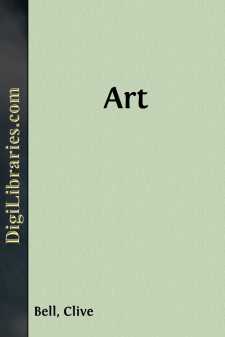 I THE AESTHETIC HYPOTHESIS

It is improbable that more nonsense has been written about aesthetics than about anything else: the literature of the subject is not large enough for that. It is certain, however, that about no subject with which I am acquainted has so little been said that is at all to the purpose. The explanation is discoverable. He who would elaborate a plausible theory of aesthetics must possess two qualities—artistic sensibility and a turn for clear thinking. Without sensibility a man can have no aesthetic experience, and, obviously, theories not based on broad and deep aesthetic experience are worthless. Only those for whom art is a constant source of passionate emotion can possess the data from which profitable theories may be deduced; but to deduce profitable theories even from accurate data involves a certain amount of brain-work, and, unfortunately, robust intellects and delicate sensibilities are not inseparable. As often as not, the hardest thinkers have had no aesthetic experience whatever. I have a friend blessed with an intellect as keen as a drill, who, though he takes an interest in aesthetics, has never during a life of almost forty years been guilty of an aesthetic emotion. So, having no faculty for distinguishing a work of art from a handsaw, he is apt to rear up a pyramid of irrefragable argument on the hypothesis that a handsaw is a work of art. This defect robs his perspicuous and subtle reasoning of much of its value; for it has ever been a maxim that faultless logic can win but little credit for conclusions that are based on premises notoriously false. Every cloud, however, has its silver lining, and this insensibility, though unlucky in that it makes my friend incapable of choosing a sound basis for his argument, mercifully blinds him to the absurdity of his conclusions while leaving him in full enjoyment of his masterly dialectic. People who set out from the hypothesis that Sir Edwin Landseer was the finest painter that ever lived will feel no uneasiness about an aesthetic which proves that Giotto was the worst. So, my friend, when he arrives very logically at the conclusion that a work of art should be small or round or smooth, or that to appreciate fully a picture you should pace smartly before it or set it spinning like a top, cannot guess why I ask him whether he has lately been to Cambridge, a place he sometimes visits.

On the other hand, people who respond immediately and surely to works of art, though, in my judgment, more enviable than men of massive intellect but slight sensibility, are often quite as incapable of talking sense about aesthetics. Their heads are not always very clear. They possess the data on which any system must be based; but, generally, they want the power that draws correct inferences from true data. Having received aesthetic emotions from works of art, they are in a position to seek out the quality common to all that have moved them, but, in fact, they do nothing of the sort. I do not blame them....