Ars Recte Vivendi; Being Essays Contributed to "The Easy Chair" 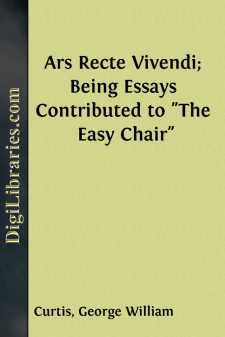 Young Sardanapalus recently remarked that the only trouble with his life in college was that the societies and clubs, the boating and balling, and music and acting, and social occupations of many kinds, left him no time for study. He had the best disposition to treat the faculty fairly, and to devote a proper attention to various branches of learning, and he was sincerely sorry that his other college engagements made it quite impossible. Before coming to college he thought that it might be practicable to mingle a little Latin and Greek, and possibly a touch of history and mathematics, with the more pressing duties of college life; but unless you could put more hours into the day, or more days into the week, he really did not see how it could be done.

It was the life of Sardanapalus in college which was the text of some sober speeches at Commencement dinners during the summer, and of many excellent articles in the newspapers. They all expressed a feeling which has been growing very rapidly and becoming very strong among old graduates, that college is now a very different place from the college which they remembered, and that young men now spend in a college year what young men in college formerly thought would be a very handsome sum for them to spend annually when they were established in the world. If any reader should chance to recall a little book of reminiscences by Dr. Tomes, which was published a few years ago, he will have a vivid picture of the life of forty and more years ago at a small New England college; and the similar records of other colleges at that time show how it was possible for a poor clergyman starving upon a meagre salary to send son after son to college. The collegian lived in a plain room, and upon very plain fare; he had no "extras," and the decorative expense of Sardanapalus was unknown. In the vacations he taught school or worked upon the farm. He knew that his father had paid by his own hard work for every dollar that he spent, and the relaxation of the sense of the duty of economy which always accompanies great riches had not yet begun. Sixty years ago the number of Americans who did not feel that they must live by their own labor was so small that it was not a class. But there is now a class of rich men's sons.

The average rate of living at college differs. One of the newspapers, in discussing the question, said that in most of the New England colleges a steady and sturdy young man need not spend more than six hundred dollars during the four years. This is obviously too low an estimate. Another thinks that the average rate at Harvard is probably from six hundred to ten hundred a year. Another computes a fair liberal average in the smaller New England colleges to be from twenty-four to twenty-six hundred dollars for the four years, and the last class at Williams is reported to have ranged from an average of six hundred and fifty dollars in the first year to seven hundred and twenty-eight dollars in the Senior. But the trouble lies in Sardanapalus....