Around the World in Ten Days 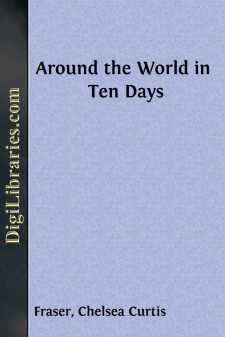 CHAPTER I PAUL AND BOB

"Did you say this big Air Derby around the world takes place this coming summer, Bob?"

"So dad told me at the breakfast table this morning, Paul. The plans have just been completed. He said full details would be in to-day's papers."

"And the afternoon edition is out now, for there's a newsie just ahead of us who is calling out the Daily Independent. That's your father's newspaper, too."

"It will be in there sure pop, Paul."

"Then I'm going to get a copy right now."

The two youths, who but a few moments before had come out of the broad doors of the Clark Polytechnic Institute along with a noisy throng of other students, paused when they reached the newsboy in question, and the taller of the pair bought a newspaper which he shoved into an inner pocket of his raincoat.

"We'll look at this in the car on our way home; a fellow can't do any reading in a storm like this," said the purchaser. "Let's hurry up a bit, Bob; I'm so eager to see what it says about that Derby that I can hardly wait to get to the station. Say, just think of it—a race around the world by air! Won't that be great?"

"I'll say so, Paul old boy! They ought to smash all existing records. You know that a man named Mears made the circuit in thirty-five days about seven years ago, and he had to depend on slow steam trains and steamships, aided by a naphtha-launch."

"That's true, Bob. Now that we have planes we ought to do a lot better. But the big oceans are the trouble for aircraft. The Atlantic has been crossed by Alcock and Brown in a Vimy-Vickers biplane, and also by our NC-4 flying-boat under the command of Lieutenant Read, and by the big English dirigible R-34; but the Pacific, with its greater breadth, has seemed so impossible that it has never been attempted."

"Why should it seem impossible?"

"Because they can't carry sufficient gasoline to cross the Pacific."

"But how about the islands?"

"The majority are not level enough to permit a landing, and others are too widely scattered. I have made quite a study of transoceanic flight since Harry Hawker and his partner, Grieve, made their unsuccessful attempt last spring to cross the Atlantic in a Sopwith machine, and for my part I can't see how this proposed Derby around the world can all be done by air, when no machine has ever yet been able to hop the Pacific."

"Well, Paul, we'll soon be at the station out of this storm, and then we can see what the paper says about it," was the philosophical conclusion of his companion.

With that they hurried on down the street, bowing their heads to ward off the sharp sleet as much as possible, while they gripped their school-books under their arms. They were a splendid-looking pair of young Americans, probably about eighteen years old, and the manner in which they swung along through the disagreeable drizzle, paying scant attention to it as they laughed and talked, showed them to be full of that boundless energy and gaiety of spirits which only perfect health and participation in athletics can bestow....