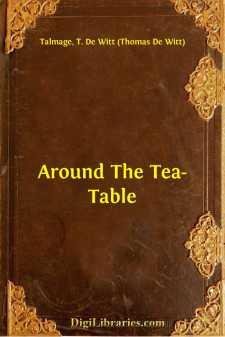 THE TABLE-CLOTH IS SPREAD.

Our theory has always been, "Eat lightly in the evening." While, therefore, morning and noon there is bountifulness, we do not have much on our tea-table but dishes and talk. The most of the world's work ought to be finished by six o'clock p.m. The children are home from school. The wife is done mending or shopping. The merchant has got through with dry-goods or hardware. Let the ring of the tea-bell be sharp and musical. Walk into the room fragrant with Oolong or Young Hyson. Seat yourself at the tea-table wide enough apart to have room to take out your pocket-handkerchief if you want to cry at any pitiful story of the day, or to spread yourself in laughter if some one propound an irresistible conundrum.

The bottle rules the sensual world, but the tea-cup is queen in all the fair dominions. Once this leaf was very rare, and fifty dollars a pound; and when the East India Company made a present to the king of two pounds and two ounces, it was considered worth a mark in history. But now Uncle Sam and his wife every year pour thirty million pounds of it into their saucers. Twelve hundred years ago, a Chinese scholar by the name of Lo Yu wrote of tea, "It tempers the spirits and harmonizes the mind, dispels lassitude and relieves fatigue, awakens thought and prevents drowsiness, lightens and refreshes the body, and clears the perceptive faculties." Our own observation is that there is nothing that so loosens the hinge of the tongue, soothes the temper, exhilarates the diaphragm, kindles sociality and makes the future promising. Like one of the small glasses in the wall of Barnum's old museum, through which you could see cities and mountains bathed in sunshine, so, as you drink from the tea-cup, and get on toward the bottom so that it is sufficiently elevated, you can see almost anything glorious that you want to. We had a great-aunt who used to come from town with the pockets of her bombazine dress standing way out with nice things for the children, but she would come in looking black as a thunder cloud until she had got through with her first cup of tea, when she would empty her right pocket of sugarplums, and having finished her second cup would empty the other pocket, and after she had taken an extra third cup, because she felt so very chilly, it took all the sitting-room and parlor and kitchen to contain her exhilaration.

Be not surprised if, after your friends are seated at the table, the style of the conversation depends very much on the kind of tea that the housewife pours for the guests. If it be genuine Young Hyson, the leaves of which are gathered early in the season, the talk will be fresh, and spirited, and sunshiny. If it be what the Chinese call Pearl tea, but our merchants have named Gunpowder, the conversation will be explosive, and somebody's reputation will be killed before you get through. If it be green tea, prepared by large infusion of Prussian blue and gypsum, or black tea mixed with pulverized black lead, you may expect there will be a poisonous effect in the conversation and the moral health damaged. The English Parliament found that there had come into that country two million pounds of what the merchants call "lie tea," and, as far as I can estimate, about the same amount has been imported into the United States; and when the housewife pours into the cups of her guests a decoction of this "lie tea," the group are sure to fall to talking about their neighbors, and misrepresenting everything they touch. One meeting of a "sewing society" up in Canada, where this tea was served, resulted in two law-suits for slander, four black eyes that were not originally of that color, the expulsion of the minister, and the abrupt removal from the top of the sexton's head of all capillary adornment.

But on our tea-table we will have first-rate Ningyong, or Pouchong, or Souchong, or Oolong, so that the conversation may be pure and healthy.

We propose from time to time to report some of the talk of our visitors at the tea-table. We do not entertain at tea many very great men. The fact is that great men at the tea-table for the most part are a bore....