Army Life in a Black Regiment 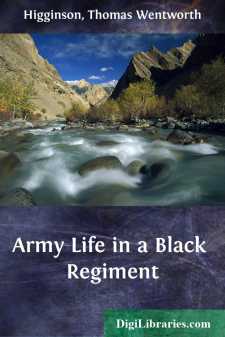 These pages record some of the adventures of the First South Carolina Volunteers, the first slave regiment mustered into the service of the United States during the late civil war. It was, indeed, the first colored regiment of any kind so mustered, except a portion of the troops raised by Major-General Butler at New Orleans. These scarcely belonged to the same class, however, being recruited from the free colored population of that city, a comparatively self-reliant and educated race. "The darkest of them," said General Butler, "were about the complexion of the late Mr. Webster."

The First South Carolina, on the other hand, contained scarcely a freeman, had not one mulatto in ten, and a far smaller proportion who could read or write when enlisted. The only contemporary regiment of a similar character was the "First Kansas Colored," which began recruiting a little earlier, though it was not mustered in the usual basis of military seniority till later. [See Appendix] These were the only colored regiments recruited during the year 1862. The Second South Carolina and the Fifty-Fourth Massachusetts followed early in 1863.

This is the way in which I came to the command of this regiment. One day in November, 1862, I was sitting at dinner with my lieutenants, John Goodell and Luther Bigelow, in the barracks of the Fifty-First Massachusetts, Colonel Sprague, when the following letter was put into my hands:

I am organizing the First Regiment of South Carolina Volunteers, with every prospect of success. Your name has been spoken of, in connection with the command of this regiment, by some friends in whose judgment I have confidence. I take great pleasure in offering you the position of Colonel in it, and hope that you may be induced to accept. I shall not fill the place until I hear from you, or sufficient time shall have passed for me to receive your reply. Should you accept, I enclose a pass for Port Royal, of which I trust you will feel disposed to avail yourself at once. I am, with sincere regard, yours truly,

Had an invitation reached me to take command of a regiment of Kalmuck Tartars, it could hardly have been more unexpected. I had always looked for the arming of the blacks, and had always felt a wish to be associated with them; had read the scanty accounts of General Hunter's abortive regiment, and had heard rumors of General Saxton's renewed efforts. But the prevalent tone of public sentiment was still opposed to any such attempts; the government kept very shy of the experiment, and it did not seem possible that the time had come when it could be fairly tried.

For myself, I was at the head of a fine company of my own raising, and in a regiment to which I was already much attached. It did not seem desirable to exchange a certainty for an uncertainty; for who knew but General Saxton might yet be thwarted in his efforts by the pro-slavery influence that had still so much weight at head-quarters?...