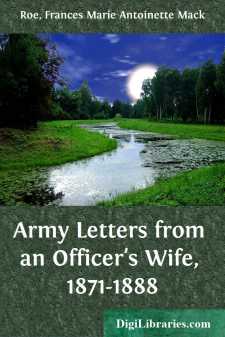 ARMY LETTERS FROM AN OFFICER'S WIFE

IT is late, so this can be only a note—to tell you that we arrived here safely, and will take the stage for Fort Lyon to-morrow morning at six o'clock. I am thankful enough that our stay is short at this terrible place, where one feels there is danger of being murdered any minute. Not one woman have I seen here, but there are men—any number of dreadful-looking men—each one armed with big pistols, and leather belts full of cartridges. But the houses we saw as we came from the station were worse even than the men. They looked, in the moonlight, like huge cakes of clay, where spooks and creepy things might be found. The hotel is much like the houses, and appears to have been made of dirt, and a few drygoods boxes. Even the low roof is of dirt. The whole place is horrible, and dismal beyond description, and just why anyone lives here I cannot understand.

I am all upset! Faye has just been in to say that only one of my trunks can be taken on the stage with us, and of course I had to select one that has all sorts of things in it, and consequently leave my pretty dresses here, to be sent for—all but the Japanese silk which happens to be in that trunk. But imagine my mortification in having to go with Faye to his regiment, with only two dresses. And then, to make my shortcomings the more vexatious, Faye will be simply fine all the time, in his brand new uniform!

Perhaps I can send a long letter soon—if I live to reach that army post that still seems so far away.

AFTER months of anticipation and days of weary travel we have at last got to our army home! As you know, Fort Lyon is fifty miles from Kit Carson, and we came all that distance in a funny looking stage coach called a "jerkey," and a good name for it, too, for at times it seesawed back and forth and then sideways, in an awful breakneck way. The day was glorious, and the atmosphere so clear, we could see miles and miles in every direction. But there was not one object to be seen on the vast rolling plains—not a tree nor a house, except the wretched ranch and stockade where we got fresh horses and a perfectly uneatable dinner.

It was dark when we reached the post, so of course we could see nothing that night. General and Mrs. Phillips gave us a most cordial welcome—just as though they had known us always. Dinner was served soon after we arrived, and the cheerful dining room, and the table with its dainty china and bright silver, was such a surprise—so much nicer than anything we had expected to find here, and all so different from the terrible places we had seen since reaching the plains. It was apparent at once that this was not a place for spooks! General Phillips is not a real general—only so by brevet, for gallant service during the war. I was so disappointed when I was told this, but Faye says that he is very much afraid that I will have cause, sooner or later, to think that the grade of captain is quite high enough....