Army Boys on the Firing Line or, Holding Back the German Drive 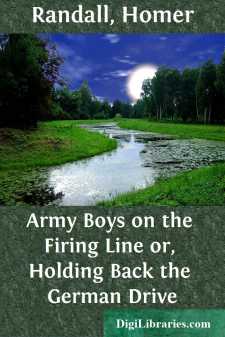 CHAPTER I FIGHTING AGAINST ODDS

"The Huns are coming!" exclaimed Frank Sheldon, as from the American front line his keen, gray eyes searched a broad belt of woodland three hundred yards away.

"Bad habit they have," drawled his special chum and comrade, Bart Raymond, running his finger along the edge of his bayonet. "We'll have to try to cure them of it."

"I think they're getting over it to some extent," remarked Tom Bradford, who stood at Frank's left. "The last time they tried to rush us they went back in a bigger hurry than they came. What we did to them was a shame!"

"They certainly left a lot of dead men hanging on our wires," put in Billy Waldon. "But there are plenty of them ready to take their places, and the Kaiser's willing to fight to the last man, though you notice he keeps his own precious skin out of the line of fire."

"I think Frank's getting us on a string," chaffed Tom, when some minutes had passed in grim waiting. "I don't see any Heinies. Trot out your Huns, Frank, and let's have a look at them."

"You'll see them soon enough," retorted Frank. "I saw the flash of bayonets in that fringe of woods and I'm sure they're massing."

"Do you remember that little thrilly feeling that used to go up and down our spines when we were green at the war game?" grinned Bart. "I feel it now to some extent, but nothing to what I did at first."

"That's because we've tackled the boches and taken their measure," commented Frank. "We know now that man for man when conditions are equal we can lick them. The world had been so fed up with stories about Prussian discipline that it seemed as though the Germans must be supermen. But a bullet or a bayonet can get them just like any one else, and when it comes to close quarters, the American eagle can pick the pin feathers out of any Prussian bird."

"It isn't but what they're brave enough," remarked Bart. "When they're fighting in heavy masses they're a tough proposition. But they've got to feel somebody else's shoulder against theirs to be at their best. Turn a hundred of them loose in a ten-acre lot against the same number of Americans, where each man had to pick out his own opponent, and see what would happen to them."

"They wouldn't be in it," agreed Tom with conviction. "Put a Heinie in a strange position where he has to think quickly without an officer to help him, and he's up in the air. Take his map away from him and he's lost."

"Even when you talk of his mass fighting being so good, perhaps you're giving him too much credit," said Billy grudgingly. "He goes into battle with his officer's revolver trained on him, and he knows that if he flinches he'll be shot. He's got a chance if he goes ahead and no chance at all if he doesn't. And you remember at the battle of the Somme how the gun crews were chained to their cannon so that they couldn't run away. You'll notice that we don't use chains or revolvers for that purpose in the American army."

"I heard Captain Baker tell the colonel the other day that what he needed was a brake instead of a spur in handling his bunch of doughboys," chuckled Tom....