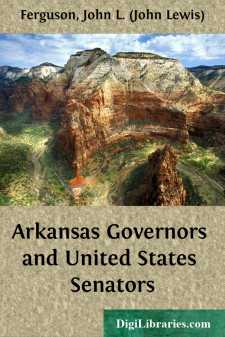 This list of Arkansas governors and United States senators, with brief biographies of each person who has served in these offices, is intended to benefit students and others who have expressed interest in a published summary of such information. We have omitted the dozens of "acting governors," including some who served for substantial periods of time, as well as senators who held office only briefly. Copies of this publication are free, and the material is not copyrighted or restricted.

GOVERNORS OF THE TERRITORY OF ARKANSAS

On March 2, 1819, Arkansas was legally separated from Missouri and became the Territory of Arkansas. The act became effective on July 4 following. During the territorial period the governors were appointed by the President of the United States, with the approval of the United States Senate, for terms of three years.

GOVERNORS OF THE STATE OF ARKANSAS