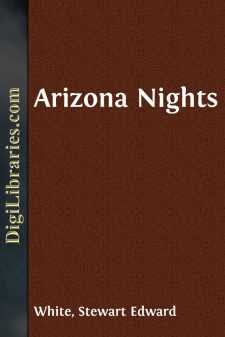 CHAPTER ONE THE OLE VIRGINIA

The ring around the sun had thickened all day long, and the turquoise blue of the Arizona sky had filmed. Storms in the dry countries are infrequent, but heavy; and this surely meant storm.

We had ridden since sun-up over broad mesas, down and out of deep canons, along the base of the mountain in the wildest parts of the territory. The cattle were winding leisurely toward the high country; the jack rabbits had disappeared; the quail lacked; we did not see a single antelope in the open.

"It's a case of hole up," the Cattleman ventured his opinion. "I have a ranch over in the Double R. Charley and Windy Bill hold it down. We'll tackle it. What do you think?"

The four cowboys agreed. We dropped into a low, broad watercourse, ascended its bed to big cottonwoods and flowing water, followed it into box canons between rim-rock carved fantastically and painted like a Moorish facade, until at last in a widening below a rounded hill, we came upon an adobe house, a fruit tree, and a round corral. This was the Double R.

Charley and Windy Bill welcomed us with soda biscuits. We turned our horses out, spread our beds on the floor, filled our pipes, and squatted on our heels. Various dogs of various breeds investigated us. It was very pleasant, and we did not mind the ring around the sun.

"Somebody else coming," announced the Cattleman finally.

A hawk-faced old man with a long white beard and long white hair rode out from the cottonwoods. He had on a battered broad hat abnormally high of crown, carried across his saddle a heavy "eight square" rifle, and was followed by a half-dozen lolloping hounds.

The largest and fiercest of the latter, catching sight of our group, launched himself with lightning rapidity at the biggest of the ranch dogs, promptly nailed that canine by the back of the neck, shook him violently a score of times, flung him aside, and pounced on the next. During the ensuing few moments that hound was the busiest thing in the West. He satisfactorily whipped four dogs, pursued two cats up a tree, upset the Dutch oven and the rest of the soda biscuits, stampeded the horses, and raised a cloud of dust adequate to represent the smoke of battle. We others were too paralysed to move. Uncle Jim sat placidly on his white horse, his thin knees bent to the ox-bow stirrups, smoking.

In ten seconds the trouble was over, principally because there was no more trouble to make. The hound returned leisurely, licking from his chops the hair of his victims. Uncle Jim shook his head.

"Trailer," said he sadly, "is a little severe."

We agreed heartily, and turned in to welcome Uncle Jim with a fresh batch of soda biscuits.

The old man was one of the typical "long hairs." He had come to the Galiuro Mountains in '69, and since '69 he had remained in the Galiuro Mountains, spite of man or the devil. At present he possessed some hundreds of cattle, which he was reputed to water, in a dry season, from an ordinary dishpan....