Aristotle on the art of poetry 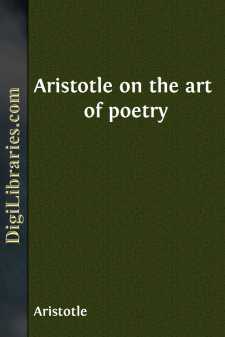 In the tenth book of the Republic, when Plato has completed his final burning denunciation of Poetry, the false Siren, the imitator of things which themselves are shadows, the ally of all that is low and weak in the soul against that which is high and strong, who makes us feed the things we ought to starve and serve the things we ought to rule, he ends with a touch of compunction: 'We will give her champions, not poets themselves but poet-lovers, an opportunity to make her defence in plain prose and show that she is not only sweet—as we well know—but also helpful to society and the life of man, and we will listen in a kindly spirit. For we shall be gainers, I take it, if this can be proved.' Aristotle certainly knew the passage, and it looks as if his treatise on poetry was an answer to Plato's challenge.

Few of the great works of ancient Greek literature are easy reading. They nearly all need study and comment, and at times help from a good teacher, before they yield up their secret. And the Poetics cannot be accounted an exception. For one thing the treatise is fragmentary. It originally consisted of two books, one dealing with Tragedy and Epic, the other with Comedy and other subjects. We possess only the first. For another, even the book we have seems to be unrevised and unfinished. The style, though luminous, vivid, and in its broader division systematic, is not that of a book intended for publication. Like most of Aristotle's extant writing, it suggests the MS. of an experienced lecturer, full of jottings and adscripts, with occasional phrases written carefully out, but never revised as a whole for the general reader. Even to accomplished scholars the meaning is often obscure, as may be seen by a comparison of the three editions recently published in England, all the work of savants of the first eminence, (1) or, still more strikingly, by a study of the long series of misunderstandings and overstatements and corrections which form the history of the Poetics since the Renaissance.

But it is of another cause of misunderstanding that I wish principally to speak in this preface. The great edition from which the present translation is taken was the fruit of prolonged study by one of the greatest Aristotelians of the nineteenth century, and is itself a classic among works of scholarship. In the hands of a student who knows even a little Greek, the translation, backed by the commentary, may lead deep into the mind of Aristotle. But when the translation is used, as it doubtless will be, by readers who are quite without the clue provided by a knowledge of the general habits of the Greek language, there must arise a number of new difficulties or misconceptions.

To understand a great foreign book by means of a translation is possible enough where the two languages concerned operate with a common stock of ideas, and belong to the same period of civilization. But between ancient Greece and modern England there yawn immense gulfs of human history; the establishment and the partial failure of a common European religion, the barbarian invasions, the feudal system, the regrouping of modern Europe, the age of mechanical invention, and the industrial revolution. In an average page of French or German philosophy nearly all the nouns can be translated directly into exact equivalents in English; but in Greek that is not so. Scarcely one in ten of the nouns on the first few pages of the Poetics has an exact English equivalent. Every proposition has to be reduced to its lowest terms of thought and then re-built. This is a difficulty which no translation can quite deal with; it must be left to a teacher who knows Greek. And there is a kindred difficulty which flows from it. Where words can be translated into equivalent words, the style of an original can be closely followed; but no translation which aims at being written in normal English can reproduce the style of Aristotle....