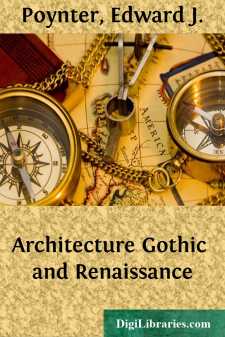 Add to My Favorites
Published: 9 years ago
Downloads: 193
Rating: (0 Votes)

Abacus.—The upper portion of the capital of a column, upon which the weight to be carried rests.

Aisle (Lat. ala).—The side subdivision in a church; occasionally all the subdivisions, including the nave, are called aisles.

Apse.—A semicircular or polygonal termination to, or projection from, a church or other public building.

Arcade.—A range of arches, supported on piers or columns.

Arch.—A construction of wedge-shaped blocks of stone, or of bricks, of a curved outline, and spanning an open space. The principal forms of arch in use are Semicircular; Acutely-pointed, or Lancet; Equilateral, or Less Acutely-pointed; Four-centred, or Depressed Tudor; Three-centred, or Elliptic; Ogival; Segmental; and Stilted. (Figs. .)

Architrave.—(1) The stone which in Classic and Renaissance architecture is thrown from one column or pilaster to the next. (2) The moulding which in the same styles is used to ornament the margin of a door or window opening or arch.

Ashlar.—Finely-wrought masonry, employed for the facing of a wall of coarser masonry or brick.

Attic (In Renaissance Architecture).—A low upper story, distinctly marked in the architecture of the building, usually surmounting an order; (2) in ordinary building, any story in a roof.

Bailey (from vallum).—The enclosure of the courtyard of a castle.

The Semicircular and the Stilted Semicircular Arch were the only arches in use till the introduction of the Pointed Arch. Throughout the Early English, Decorated, and Perpendicular periods they occur as exceptional features, but they were practically superseded after the close of the 12th cent.

The Lancet Arch was characteristic of the Early English period, is never found earlier, and but rarely occurs later. The Equilateral Arch was the favourite arch of the architects of the geometrical Decorated, but is not unfrequently met with in the early part of the Perpendicular period.

The Depressed (or Four-centred) Tudor Arch is characteristic of the Perpendicular period, and was then constantly employed. The Ogival Arch is occasionally employed late in that period, but was more used by French and Italian architects than by those of Great Britain.

Barge-board (or Verge-board).—An inclined and pierced or ornamented board placed along the edge of a roof when it overhangs a gable wall.

Basilica.—(1) A Roman public hall; (2) an early Christian church, similar to a Roman basilica in disposition.

Bastion (in Fortification).—A bold projecting mass of building, or earthwork thrown out beyond the general line of a wall.

Bay.—One of the compartments in a building which is made up of several repetitions of the same group of features; e.g., in a church the space from one column of the nave arcade to the next is a bay.

Bay-window.—A window projecting outward from the wall. It may be rectangular or polygonal. It must be built up from the ground. If thrown out above the ground level, a projecting window is called an Oriel. (See Bow window.)